This is the first Yukon AT4, being offered on the new full-size SUV platform. For people looking for features, performance and capability, it is worth the wait
#GMC

GMC brought out its Denali trim level for its vehicles some years back, and it has been nothing short of a phenomenal success, as it turns out that not only are there plenty of people who want “Professional Grade” pickups and SUVs, but they want that professionalism ladened with levels of luxury. Denali was made available on the 1999 Yukon, and they haven’t looked back since.

Indeed, when it came to what they could do, they looked forward.

Last year, the people at GMC product planning determined that there was something else they could do with their vehicles to bring them up a notch, perhaps not to Denali level, but to another place. They created the AT4 sub-brand that first appeared for the 2019 Sierra. 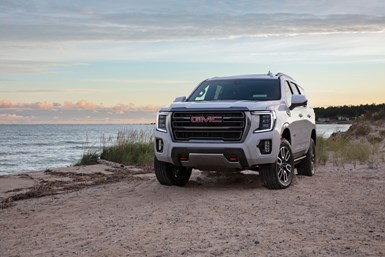 AT4 brings off-road capability to the space of a premium product.

As AT4 has become extremely successful in the market—and actually resulting in vehicles that are being driven off of dealer lots that have higher average transaction prices (ATPs) than comparable vehicles from BMW, Audi and Jaguar—it is no surprise that for the all-new Yukon the AT4 amenities were made available.

(And while on the subject of ATPs, according to GMC data, the 2019 Yukon—the generation being replaced by the 2021 model—had the highest ATP in the large SUV segment. Adding the AT4 is only going to add frosting to that cake.)

So what does the AT4 Yukon bring?

There is a distinctive fascia (Denali is bright; AT4 is more dark or body colored here as well as across the exterior trim), and red tow hooks just below the area that would once upon a time been known as a bumper. Speaking of that vehicular space: because the AT4 is more off-road capable (let’s face it: vehicles that spend their time on concrete and asphalt don’t have a particular need for tow hooks), there is a 32° approach angle—but this leads to another feature that is available for the vehicle, which is “Air Ride Adaptive Suspension,” which, when the vehicle is in 4WD LO, the body can be raised by nearly two inches (50 mm, to be exact), which allows that approach angle to be achieved. (However, in cases when rolling on a highway—and let’s be fair: most people are going to spend more time towing a trailer along I-75 with their Yukon than they are likely to be crawling over rocks—the Air Ride Adaptive Suspension  will drop the ride height by 20 mm when cruising. And as this is a large vehicle, there is the issue of ingress and egress (i.e., climbing in and out), there is also the ability for the vehicle to drop 50 mm to make that easier.) Three rows inside this SUV—with the third row actually being reasonably roomy.

And speaking of the suspension, while the Air Ride is an option, the standard AT4 (and Denali) has coil springs with Magnetic Ride Control 4.0. Think of it this way: when you are riding along in a normal full-size SUV, the shocks react pretty quickly in most cases so that it isn’t a jarring experience. But with the AT4, information comes in from accelerometers and yaw sensors on each wheel at a rate such that if you’re driving 60 mph, the shocks are adjusted for every inch of travel (and in case you’re wondering, there are 3,801,600 inches in 60 miles).

Just Some of the Stuff

On the business end of things, the AT4 has: It is almost like a comfortable media room on wheels.

On the comfort end of things it has:

(While not AT4-specific, for those who are in the second row there are 12.6-inch diagonal touch screens available on the back of the driver’s and front passenger’s headrests that provide an array of entertainment options, such as PlayStation, Apple TV, Roku, and Chromecast. These are really impressive, and although there is a 15-inch head up display for the driver—said to be the largest in the segment—and a 10.2-inch diagonal screen in the center stack for infotainment, those rear seat screens are a reason why riding shotgun isn’t necessarily the correct choice.) The people in the second row can get quite a screen.

The Importance of IRS (No, not the tax agency)

The new Yukon has an independent rear suspension (IRS) system which provides advantages in terms of interior packaging. Especially for the third row, as there is 34.9 inches of additional third row legroom (an increase of 40%), and I found that the third row center seat is absolutely optimal, as you can stretch your legs way out between the two second-row seats. The independent rear suspension also boosts the cargo room behind the third row: it is 25.5 cubic feet now, which is an increase of 66% compared to the outgoing model.

In terms of powertrain, the AT4 features a 5.3-liter V8 with dynamic fuel management (a.k.a., cylinder deactivation, but really rather dynamic as sensors are monitoring and adjustments are being made throughout one’s driving cycle) and stop/start. (These measures contribute to an EPA estimated fuel economy of 16 city, 20 highway and 18 mpg combined.) The engine produces 355 hp @ 5,600 rpm and 383 lb-ft of torque @4,100 rpm.

The AT4 as driven was equipped with the Active Response 4WD system, that monitors the road conditions and makes adjustments according. There is an electronic limited slip differential as part of the system.

This is a new platform for the SUV. And it is evident that inside, outside, and under the hood, the designers and engineers who worked on the Yukon clearly knew that this was an opportunity to elevate their offering in what is becoming an increasingly crowded segment (including vehicles that are smaller but customer adjacent).