One of the things about hybrid vehicles is that even though they have been in the world for decades now, even though some race cars have hybrid systems, hybrids are often thought of in the context of being thrifty vehicles. Perhaps this is predicated on the early days of the vehicles, when OEMs somehow had to accommodate the costs of a dual-powertrain system (engine and motor) while making the vehicles priced such that people would actually be able to afford them. A consequence, perhaps, was something that the early hybrids were. . .lacking. Those who were hybrid inclined didn’t have a problem with that. Those who were hybrid skeptics felt justified in their criticism of what they thought was not a “real” car.

When concepts are formed, they are hard to dispel.

One of the things that have happened through the years of putting hybrids into vehicles is that even for mainstream cars and crossovers the packaging is better and better, with the vehicle manufacturers taking generally one of two approaches: tech or premium. 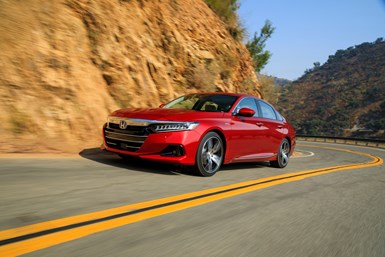 The 2021 Honda Accord Hybrid: attractive, efficient and comparatively affordable. What’s not to like? (Images: Honda)

As the Honda Accord is a car that has massive sales in its existence—on the order of 14-million sold—there is an expectation of what an Accord is. It is a well-built, stylish, value-for-money car that has what you need and want (there are trim levels that will allow you to get that), a car that you know you’ll be able to depend on for years. It is a car that has been able to change with the times. Even though there is that crossover phenomenon in the market—and Honda has models to address that—the Accord is something of a stalwart.

So I must admit to being surprised when climbing into the Accord Hybrid Touring. Yes, this is the top trim for the model, with a starting MSRP of $35,840 (the entry level is simply designated “Hybrid” and it starts at approximately $9,500 less).

But in this vehicle, I felt like it was not a Honda but an Acura, because the exterior execution is absolutely superb. Yes, there’s leather. And whether or not what appears to be metal and wood are or aren’t, this is first-rate trompe l’oeil at the very least. 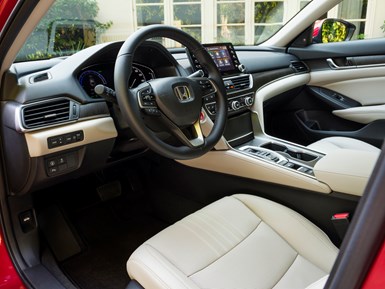 The interior execution is really a class-above.

And, of course, there is an array of technology, from the 12-way power driver’s seat (which in this trim level is both heated and ventilated) to a head-up display, from wireless charging to rain-sensing wipers.  Yes, there are Apple CarPlay and Android Auto. There is an 8-inch touchscreen display that has knobs for volume and tuning. Moonroof. Remote engine start. Heated rear seats.

And let’s think about that for a moment. Heated rear seats. While this isn’t something generally thought about, in order to get seat heaters to actually heat, there must be some power diverted to the system. Back in the days of the “thrifty hybrid,” this would be unthinkable—heck, a heated driver’s seat would be beyond the pale. Yet here we have the Accord Hybrid Touring with that feature. Remarkable. (And know that there are plenty of midsize sedans that don’t have hybrid systems and prices notably higher that don’t have heated rear seats on offer.)

And there is the array operational tech, such as adaptive cruise control, collision mitigation braking, lane-keep assist, blind-spot monitoring. . . .

Under the Hood (You Don’t Need to Know)

As for the hybrid system—and let’s face it, ordinary people who are going to buy a hybrid really don’t need to know more than the fact that there is an output of 212 hp, which is actually better than the turbocharged Accord (192 hp)—it uses two motors, one for propulsion and one as a generator/starter, which means that (1) the throttle feel is like, well, a “regular” Accord and (2) that the vehicle operates on electricity for a good amount of the time you’re traveling, such that the vehicle has EPA fuel economy numbers of 44 mpg city, 41 mpg highway and 43 mpg combined. (For those opting for a less-lux version of the Accord Hybrid, know that the other trim levels have an EPA estimated 48 mpg—and that’s city, highway and combined.) It should be noted that there is also a 2.0-liter engine under the hood that operates on the Atkinson-cycle, which means that it is efficient, so it is not all about the electric motors. 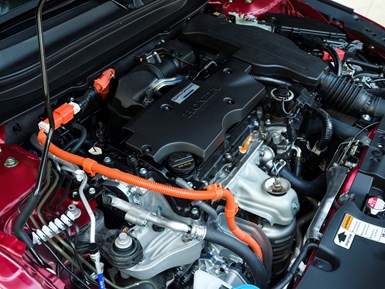 Let’s face it: You’re unlikely to ever look at this.

Nowadays gasoline is not particularly expensive. And some argue that this will be the case for some time to come. So why, some people would ask, would anyone buy anything but a straight-up internal-combustion powered car because gas is not much of an issue, and the fuel economy numbers of those vehicles are good (e.g., the non-hybrid 2021 Accord Touring’s numbers are 22/32/26 mpg).

Maybe because having to frequent gas stations less often is a benefit.