The LC was executed so well that the chief engineer was named president of Lexus. Think about that.
#people #Lexus

This Is How You Know You Engineered Something Right

Koji Sato was the chief engineer for the Lexus LC vehicles, the LC 500 Coupe and the LC 500 Convertible. And he has become the president of Lexus International.

Obviously, he did something right in creating vehicles that drive as well as they look. And they look sensational. 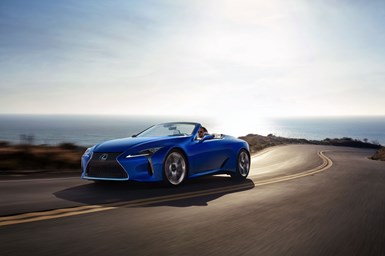 Designed and engineered to be driven. (Images: Lexus)

Getting the Fundamentals Right

According to Joel Fukumoto, Lexus Product Planning and Strategy Manager, chief engineer Sato looked back to create the LC. That is, realize that they were developing a new chassis for a sports car powered by a 471-hp V8.

Apparently, Sato pointed out to his team that back in the 1960s sports cars didn’t have the technological steering aids that exist today. So their goal was, Fukumoto said, “to get the fundamentals right. Everything follows from there.”

So they spent plenty of time driving development vehicles. Testing and tuning. Tuning and testing.

Until they got the balance between ride comfort and responsiveness they were looking for.

Sure, the LC has the tech.

(For example, there is Adaptive Variable Suspension (AVS) that provides continual adjustment of damping control in response to how the vehicle is being driven and the road surface conditions; it has the ability to adjust to 650 different levels of damping force.)

But it also has the fundamentals right.

One of the interesting aspects of the exterior design is that the LC 500 Coupe, which came out as a model year 2020 vehicle, looks like it is an extrusion that was sculpted to have smooth lines from front to rear, from side to side.

Yet the roofline of the LC 500 Convertible has a roofline that includes discernable roof bows through the four-layer soft-top design.

They could have made this a folding hardtop. But they decided that for aesthetic as well as performance issues they’d go with something more conventionally a convertible.

That is, it telegraphs what it is.

And from a ride-and-handling POV, the engineering team wanted to assure that they’d keep the center of gravity low and close to the center of the vehicle, which a folding hardtop would challenge.

And for the soft top, there are mass countermeasures used, like using magnesium and aluminum components for the roof links and the support structure.

(Speaking of weight: the curb weight is 4,540 pounds and the front/rear weight distribution is 52.5/47.5. The Convertible is 200 pounds heavier than the Coupe.)

It is worth noting that the roof actuation—which can be opened or closed at speeds up to 31 mph and which requires 15 seconds to open and 16 seconds to close—is performed by a hydraulic system that features an electromagnetic valve to control the operation.

There was a concern with the sound that one would hear with the top down on the LC 500. So the Mark Levinson audio system, for example, has automatic EQ adjustment to accommodate the open-air environment. What’s more, there is a polycarbonate wind deflector that helps restrict unwanted air from entering the cabin at low speeds (air carries soundwaves, so there are fewer of those) and the windscreen is designed to help accommodate the ability to converse when at higher speeds.

In addition to which, there is an Active Noise Control system to reduce unpleasant sounds.

But the sound of the V8 engine is something that people undoubtedly want to hear. So the intake pulses of the engine are collected by a diaphragm that then goes through a sound pipe that goes to the cabin. What’s more, the exhaust tone is also processed such that it rumbles into the cabin space.

The LC 500 Convertible has a Direct-Shift 10-speed automatic transmission.

Fukumoto said while they might have considered a dual-clutch transmission were they “building a 911 fighter,” they opted for the 10-speed automatic because it was more in keeping with the “Lexus driving signature.”

That said, know that it can go from 0 to 60 mph in 4.6 seconds and has an electronically limited top speed of 168 mph.

This is not the vehicle for everyone. In fact, it is the vehicle for very few. Realize that it starts at $101K and the one that I drove (adding 21-inch forged wheels, head-up display, limited slip differential, Touring Package, special paint and handling) made it to $111,920, so this is something that has a structural limit to those who can and will afford it.

Jessamine Merrill, general manager of Lexus Product & Marketing, says that they anticipate that the LC 500 Convertible may account for about a third of overall LC sales.

For the first half of 2020 Lexus delivered 415 LC Coupes. Of course, given COVID-19, reduced sales are to be expected.

This is not a car that you’re going to see yourself coming and going in.

And it is a car that you’ll enjoy coming and going in.