There hasn’t been a Ford Mustang Mach 1 for 17 years.

To put that into some perspective, realize that in 2003 iTunes was launched, Arnold Schwarzenegger was elected governor of California and the Concorde took its last flight.

Seventeen years is a long time.

So obviously the performance people at Ford knew that this new one had to be something that would provide a nod to heritage but be a landmark in its own right. 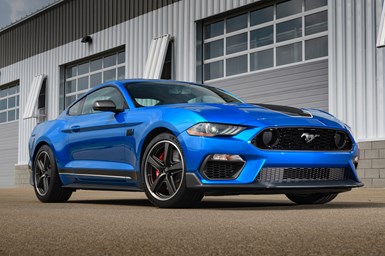 Chief engineer Carl Witmann and his team, who were more than passingly familiar with the Shelby GT350 and GT500 models, set about to engineer a vehicle—with a specially calibrated 5.0-liter V8 that produces 480 hp at 7,000 rpm and 420 lb.-ft. of torque at 4,600 rpm under its non-shaker hood (they discovered that they were getting a sufficient amount of air by pulling it from the front of the vehicle) mated to a standard Tremec 3160 6-speed manual transmission (from the Shelby GT350) and a suspension setup that allows the vehicle to handle the track (MagneRide calibration, a stiffer steering I-shaft, new EPAS calibration, stiffer sway bars and front springs, a brake booster from the Mustang GT Performance Pack Level 2, 9.5-inch/10-inch split fitment wheels with Michelin PS4 tires, a rear subframe with stiffer bushings and a rear toe-link from Shelby GT500)—to perform. Tuned for the track.

So, what’s the view from Gordon Platto, Ford Design Director, North American Cars and SUVs, about the 2021 Mach 1?

“It’s just one of those vehicles that, when you’re walking up to it, puts a smile on your face. That’s what every icon should do in the end,” Platto said.

But then there is something else about seeing the car: “There is an emotional aesthetic about the vehicle: it looks powerful, aggressive. We wanted to make this vehicle look as menacing as we could in your rearview mirror.”

Which seems to the be case that if you’re going to get behind the wheel you’re smiling and if you’ve got one behind you you’re a bit agitated.

There is a two-piece mesh front grille with mesh pushed deeply back below the shark-nose segment. There are also faux lamp elements up front, which Platto acknowledged is a “nod to heritage.”

One of the things that is used throughout the Mach 1 is a low-gloss color named “Magnetic,” which is used for the pony in the center of the grille, on the rear spoiler, accents on the sideview mirrors, and other badging. The aero back there isn’t for show.

Overall, there is a palette of colors for the vehicle, including Fighter Jet Gray (a Mach 1 exclusive), Iconic Silver, Shadow Black, Oxford White, Velocity Blue, Twister Orange, Race Red, and Grabber Yellow. Then there is the possibility of getting Satin Black side and hood stripes, as well as Red, White and Orange reflective accent stripes.

On the Track Pack version that gets the Fighter Jet Gray paint the Brembo brake calipers are painted orange.

“We’re nodding to its heritage,” Platto said of the interior. “The IP has a unique feature that we call ‘dark spindrift,” which is a new, modern take on spun metal.”

There are four different seats, two of which are cloth and one of which is Recaro. And again, for that Fighter Jet Gray Appearance Package there is, Platto said, a ½-inch orange stripe on the top of the seats. For those going with the manual transmission (there is also a 10-speed automatic), the shifter knob is a cue ball. Also on the inside is an engraved plaque that indicates the chassis number of this special edition Mustang, which will be coming Spring 2021.