Without a doubt, the people at Nissan who were working on developing the 2021 Rouge midsize crossover knew that they had their work cut out for them for two simple reasons:

So, on the one hand, you have to beat the competitors. And on the other, you have to keep the customers who have opted in the past for the model, bring in new buyers, and appeal to both (e.g., you want something that looks fresh and new without alienating those who have already bought the marque).

And they’ve succeeded in their mission. 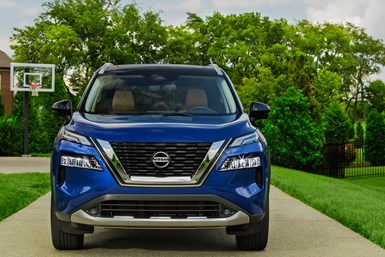 A fresh face for the Nissan Rogue. (Images: Nissan)

The Rogue is targeted at young families, which is manifest in such things as rear sunshades, a five-anchor latch system and, notably, a Tri-Zone climate control system that allows the rear temperature to be set at a different setting than that of the front-seat occupants, as in keeping an infant warmer than the folks up front.

And it is targeted at young families who have to keep an eye on the budget. The Rogue S FWD has a starting MSRP of $25,650 and the walk to the top trim goes to the Rogue Platinum AWD with an MSRP of $38,830.

The vehicle Driven here is the SL, a front-drive version with a starting MSRP of $32,000 and the optional--$1,320—Premium package that brings ProPILOT Assist with Navi Link (a clever system that keeps your vehicle in its lane during operation on divided highways and, linked into the navigation system, does so when you’re operating in adaptive cruise and are going to a ramp); front and rear sonar (very useful when pulling into a garage or out of a parking spot); wireless Apple CarPlay (seemingly a requirement nowadays); a nine-inch color display with multitouch control (which has good bright colors) Bose premium audio (the stalwart brand for solid sound); voice recognition (I am still one of those who finds talking to one’s vehicle odd); and SiriusXM Traffic (which is useful for the getting to where you need to go with as minimal frustration as possible). It features premium paint for $395 (Scarlet Ember Tintcoat), which is certainly a nice color and brings to mind the question of when vehicles that didn’t come from Germany started with an upcharge for paint. Then there are the mats and cargo area protector package ($385) and the destination and handling charge of $1,095, which brings the total to $35,195, which is actually below the estimated average transaction price for a light vehicle in the U.S. according to Kelley Blue Book for September 2020: $38,723. Which is something families would pay attention to. 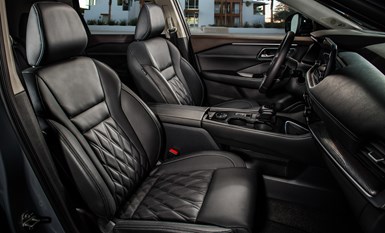 Interior execution is a class-above.

The Rogue is powered by a 181-hp 2.5-liter four that is mated to a continuously variable transmission. As I mentioned when I drove the new Sentra, Nissan powertrain engineers have done a great job of calibrating powertrain setups, and this is more of the same.

The bottom line here is that the folks at Nissan were cognizant of the improvements—continuous and otherwise—that its competitors have made for their vehicles. Nowadays, with more people doing the spreadsheet approach to buying a vehicle, ticking off the boxes is important, and the number of those boxes is ever-increasing.

And Nissan has clearly made its spreadsheet and made sure that it didn’t leave any blank spaces.

Take the family on a road trip. You’re not going to fly anywhere. . .