If his name is Mikey, then one could say, “Mikey likes it!”
#reviews #Toyota

Because I’m working at home, the Toyota Supra is parked in my driveway, and given where I am sitting in proximity to the front window, I am able to glance up and see the car. 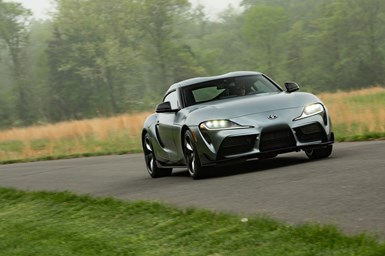 Stylish even to look at. (Image: Toyota)

As those of you who have gone from an office building to your residence probably know, there are a whole lot of people in your neighborhood whom you don’t know, as you’ve been working, not watching them go by your house. Guess that could be chalked up as an advantage.

A few minutes ago I saw a mom and what was probably a five-year-old walking by. The little guy was helmeted and riding a 20-inch two-wheeler, and mom had her hand on his shoulder, providing the balance that the training wheels that must have recently come off no longer did.

As he went by, his head swiveled and eyes locked on to the Supra. He knew it was something special, something unlike the Flexes and Pacificas in most of the other driveways. That is certainly a good sign for Toyota, in that he’ll probably be in the market for a 2040 model Supra.

There are two numbers that need to be considered for many people about the Supra before going on: 2 and 4.5.

The first is the number of people who can sit in the vehicle, including the driver. While that may seem obvious, when most people are driving things that have an occupancy of a minimum of five, even though something that evidently looks as taut and compact as the Supra might lead them to think that there has to be space for at least four. Nope.

And the 4.5 is the ground clearance, in inches, of the Supra. A Camry’s is 5.7 inches. A RAV4’s is either 8.4 or 8.6 inches, depending on trim. Which means that you are going low to get inside of the Supra. Again, something that would seem obvious, but as there are probably a bunch of Boomers who are going to be thinking that this is the car for them, those bum knees have to be taken into account. (It should be pointed out that even the 2020 Corvette Stingray is comparatively high vis-à-vis the Supra: 5.3-inch ground clearance.)

The first number is the horsepower generated by the 3.0-liter, in-line six with a twin-scroll turbocharger. Peak horsepower is available from 5,800 to 6,500 rpm.

Both of those numbers had been lower for the 2020 model year vehicle (they were 335 hp and 365 lb-ft, which, as you can see, is a huge increase in the horsepower, achieved, in part,  via another number, six: there is a dual-branch exhaust manifold, which has six ports instead of two).

And while in the powertrain discussion space, it is worth noting that it has an eight-speed automatic that, yes, you can shift with paddles. Which means this is a comparatively light car. If you look at the available horsepower and that curb weight, then you can roughly calculate that each horsepower has to grapple with just 9 pounds of mass (actually 8.8, but the eyeballing works just fine).

On a non-numeric basis and one that’s completely subjective: When you are cocooned in the cabin—again, those used to driving things that are sizable to say the least, being in the Supra is going to be an experience that is best not undertaken by those who have claustrophobia because this is a car that is meant to be driven with glee, not something you’re going to take to Costco to pick up a few things because the size of those few things are not going to be readily accommodated (e.g., “Uh, why don’t I use the passenger seat for that package of paper towel and I’ll come back and get you?”)—you’re going to find that while well executed, it isn’t the sort of thing that brings the bridge of the starship Enterprise to mind, as is the case of an increasing number of vehicles nowadays. 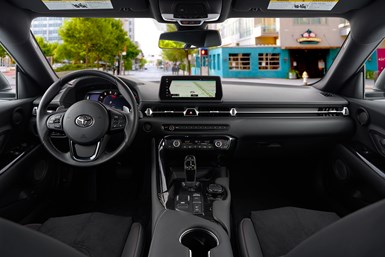 Which brings me back to the little boy.

Driving a Supra is like that. In fact, that’s pretty much the reason it exists. Besides the looking so good that even kids know it is something special.