According to David Christ, “It is unfair to call it a van. What we call it around here is ‘an SUV with sliding doors.’”

The “it” is the new Sienna. Around there is Toyota North America. And Christ has something of a deep perspective on it, as he is group vice president and general manager, Toyota Division, Toyota Motor North America.

But that said, I have to disagree with him. 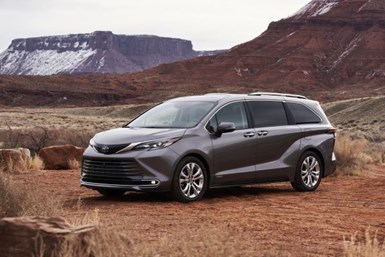 Yes, I get it that SUV sales are growing and are expected to continue to grow.

I get it that for going on a generation there has been the term “soccer mom,” which has been associated with minivans, so “[mini]van” is not the thing that you want to have your vehicle associated with.

But I think that the Sienna in its brand-new iteration is so greatly changed that to attach it to an SUV really does a disservice to the Sienna. (“Sorry, Dave.”)

Then there is the powertrain.

This is the fourth-generation Sienna. It was designed by CALTY in Newport Beach and Ann Arbor. (And it was engineered in Ann Arbor. And it is being manufactured in Indiana. Yes.)

The Design, Outside & In

Kevin Hunter is the president of CALTY. He grew up in a suburb of Detroit. He knows about the functionality of minivans from whence he came as well as being a professional.

He knows about the “stigma” associated with what is arguably one of the most functional vehicular architectures in existence. 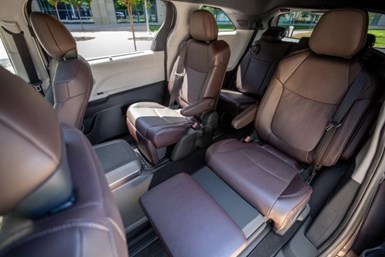 Look at the seat extensions: You’re not going to call “shotgun”—you want to get into row two.

So Hunter says that when they styled the Sienna, they had young families in mind. Families make sense because the vehicle, depending on the configuration in the second row (captain’s chairs or not), seats seven or eight. A crowd. A family. Hell, let’s say it: nearly an entire soccer team (down just by three or four).

But then there is that young part to it. These people have grown up in an age where Apple has made every company care about design. That’s pretty much all these people know. Badly designed products are either shunned or have simply disappeared.

This means that the CALTY team had to be cognizant that its potential customer base was going to hold them to an exceedingly high standard.

Hunter says that when they were styling the vehicle, they worked to make it “assertive and proud.”

This is not something that anyone should be in the least bit apologetic about or have to make excuses for.

Hunter says that influences ranged from the Japanese shinkasen, or bullet train, to. . .yes, an SUV.

The sheet metal of the 2021 Sienna is more expressively formed than almost anything that isn’t built in volumes of a few hundred per year. 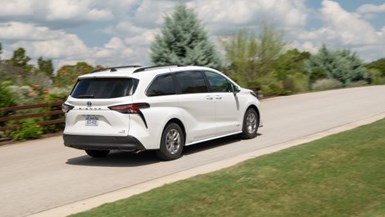 This is not an SUV.

Of course, the inside is what is probably more important than the exterior because that’s where drivers and passengers spend their time.

Benjamin Jimenez was the interior chief designer on the vehicle. He says that his team worked to create “sleek architecture.” To create a surrounding that is “engaging, open, optimistic.” And in terms of an outside object that influenced their thinking, he cites a sailboat—clutter-free, functional, open.

And they’ve pulled this off, especially providing the open feel.

When you’re in the Sienna, it is as though you are in a well thought out room. (And given the prevailing pandemic, it is not unthinkable that there might be some family trips largely predicated on traveling in this comfortable cabin, taking advantage of the optional JBL 1,200-watt amp/12-speaker Premium Audio and 1080p HD rear entertainment system.)

Then there is the powertrain.

This, to me, is puzzling.

Not puzzling for what it is.

Puzzling as to what took Toyota so long. 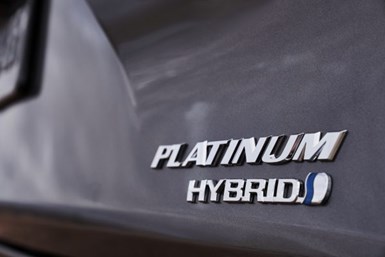 The Sienna, at last, is a hybrid. Only a hybrid. No non-electrified internal combustion engine offering in the lineup.

The Sienna is powered by the “Toyota Hybrid System II.” Which means that there is a 2.5-liter engine that is supplemented by a 134 kW electric motor (and for those opting for the AWD version of the Sienna there is a second 40 kW motor in the rear). So between the two, the horsepower number is 245.

The primary purpose of a hybrid is to provide drivers with better fuel economy. (Yes, it helps with emissions, too, but odds are, most hybrid drivers are looking at the mpg numbers.)

But the estimated fuel economy numbers for the 2020 model:

And this is quite a minivan.

Nowadays, it seems that the only minivans that garner interest are those Pacificas equipped with all of that Waymo gear. What seems to be not mentioned is the fact that the minivan was undoubtedly selected for the autonomous application because it has (a) sliding doors and (b) plenty of room for occupants.

It very well may be that the minivan will become the architecture of choice going forward—not just for autonomous vehicle companies, but for regular consumers, too.

While there is an on-going SUV mania, I’ve got to believe that some young family is going to go into a Toyota dealership with their eye on a Highlander who are going to wander over to the 2021 Sienna, think “What’s this?” and spend some time discovering what it is all about.

And driving away in one.