“In 2025, approximately one in five new vehicles across the world will be equipped with a 48-volt drive,” Juergen Wiesenberger, head of Hybrid Electric Vehicles at Continental North America said last week.

And Continental is doing its part to make that happen, as it announced the volume production launch of its low-voltage hybrid drive system, which is going to be deployed in the Renault Scenic Hybrid Assist model. 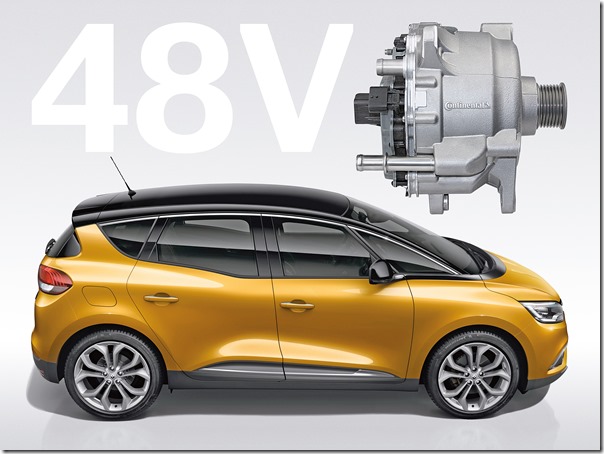 This system is a “P0” type, which means that there is an electric motor—in this case a water-cooled induction motor with an integrated converter—that’s attached by belt drive to the crankshaft of the engine. There is a DC/DC converter as part of the system, as well as a lithium ion battery.

Through the use of the belt drive, up to 150 Nm can be transmitted to the crankshaft. The system is compact, taking the place of an alternator. (One way a compact size is maintained: the inverter—which is based on a metal-oxide-semiconductor field-effect transistor (MOSFET)—is integrated in the housing lid.

The DC/DC converter allows the 48-volt system to be connected to the vehicle’s on-board power supply such that some of the energy in the lithium-ion battery can be used for on-board applications.

That said, what’s the benefit? Fuel savings. For one thing, the engine can be switched off, not simply when the vehicle is at a stop (which is what start-stop systems can do, and know that they’re generally based on 12-volt batteries), but as a vehicle approaches a stop, at speeds of 13 mph and below. It has been found that on the New European Driving cycle, the fuel savings is 13 percent. According to Continental, in city driving, fuel economy gains are even better, as much as 21 percent, due to the fact that there is more time driving at slow (or no) speed.

And it is worth noting that the 48-volt system provides an engine restart within 0.2 seconds.

Wiesenberger noted, “Other production launches for both diesel and gasoline vehicles are in the pipeline for North America, Europe and China." Which will help move toward that 20 percent deployment of 48-volt systems.