The V06, a mashup of a 1963 Volvo 122S Amazon and a 2013 Grand Sport Corvette (it has a 600-hp Lingenfelter-built LS7 under the hood), generated a lot of excitement in Scottsdale this past weekend—and money, too. 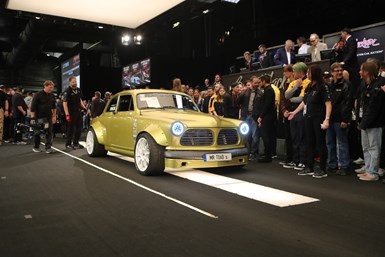 The custom vehicle was built by Jeff Allen and the Flat 12 Gallery (check out the hyperlink for plenty of info about both), with the assistance of Pennzoil. Allen owns the Flat 12 Gallery, a boutique, collectible and high-line dealership and build facility in Dallas, Texas, and is well known for things like his “Skidmarks Show” podcast on iTunes and his three seasons of hosting “The Car Chasers” on CNBC.

The V06 was sold at Barrett-Jackson Scottsdale for $150,000, with the proceeds going to the SEMA Memorial Scholarship Fund.

After the hammer fell at $150,000, Allen said, “When I set out to build and campaign this vehicle for charity, I never imagined the impact it would have.”

The SEMA Memorial Scholarship fund programs provide financial assistance up to $5,000 to students, who can apply at https://www.sema.org/scholarships.