When reduced to its basics, there are four types of hybrid powertrains: (1) micro hybrids; (2) parallel hybrids; (3) power-split, two-mode or series-parallel hybrids; and (4) series hybrids. [The last in this series is more commonly known as an E-REV, or Extended-Range Electric Vehicle, and is best represented by the Chevy Volt/Cadillac ELR.]
#Infiniti #Ford #Hyundai 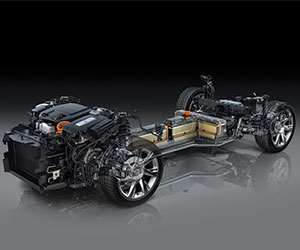 The 2014 Cadillac ELR—like the Chevy Volt, upon which it is based—is a plug-in series hybrid, a.k.a., an extended-range electric vehicle.

If this isn’t confusing enough, there also are “full” and “mild” hybrids. The former is capable of propelling the vehicle on just the engine, just the electric motor or on a combination of both.  “Mild” hybrids offer start-stop capability, perhaps with a level of power assist to the combustion engine and regenerative braking. Unlike full hybrids, they can’t provide full-EV propulsion.

Micro hybrids are the first step between conventional internal combustion-powered vehicles and true hybrids. They add start-stop capability, shutting down the engine when the vehicle has come to a complete stop, and electrical load is low enough to allow it to be met without need for the alternator to recharge the battery. It provides its benefits by eliminating idling and quickly spinning the engine up once the brake pedal is released, allowing the driver to accelerate away from a stop normally. It is only starting to make its presence felt in North America due to the fact that the official EPA drive cycle doesn’t include much time where the test vehicle is stationary, so  this option makes little difference in the mileage rating. Nevertheless, Ford offers stop-start on the 1.6-liter Fusion, and versions are offered by BMW, Porsche and Kia. Studies expect eight million U.S. vehicles by 2017 to use the technology, thanks to the new CAFE standards. It will expand as automakers upgrade electrical systems and batteries to allow engines to be shut off while the vehicle is coasting.

Ford is offering a start-stop system on the Fusion as a low-cost option, one that can help improve the fuel efficiency of the sedan.

The parallel hybrid couples a combustion engine, an electric motor and electronically controlled clutches. Honda’s Insight, for example, uses a parallel hybrid drivetrain, placing a 10-kW brushless electric motor between the 1.3-liter inline four-cylinder engine and CVT transmission. Because they apply power to the same shaft, the speeds of the two power sources are equal, and the torque values add up, with the electric motor adding or subtracting torque as necessary. Honda claims it is smaller and both less expensive and complex than power-split systems, while offering some of their mileage advantages. In addition to the Insight, Honda offers this technology on the Civic, CR-Z and Acura ILX.

The Belt Alternator Starter (BAS) mild hybrid is another form of parallel hybrid that uses a battery and motor-generator unit that replaces the conventional alternator.  It can provide modest power upon launch or under acceleration, and recover some energy through regenerative braking. It does not require any significant modifications, can be produced on the same line as a non-BAS vehicles (great for production balancing), and is one of the least expensive hybrid systems available. The latest version of this technology at GM is called eAssist, and uses a 15-kW motor-generator in conjunction with a 115-volt lithium-ion battery. It is currently available on the Buick Regal and LaCrosse, and Chevy Malibu.

The Honda CR-Z features a parallel hybrid, placing an electric motor between the engine and the CVT.

Power-split hybrids are the ones most people think of, thanks to the success of Toyota’s Prius. As with the pure parallel system, there is an internal combustion engine and an electric motor-generator.

However, power is shared and drives the wheels through a planetary gearset that can allow either power source to provide 0% to 100% of the vehicle's power need. Toyota's Hybrid Snergy Drive uses a second electric motor, mounted on the output shaft, and it works with the planetary gearset and primary motorgenerator to create a CVT transmission equivalent. The term “power-split” refers to the fact that these hybrids have power paths to the wheels that can be either mechanical or electrical, and that the power demanded by the driver is decoupled from the power supplied by the engine.

The engine most often used with this hybrid system is an Atkinson-cycle gasoline unit. Unlike the typical Otto-cycle engine, it has less power density and low-rpm torque, but higher efficiency. The electric drive motor provides full torque the minute it begins to turn, filling in the gap and allowing the Atkinson-cycle gas engine’s efficiency to be preserved. When more acceleration is needed, the two combine forces to provide the necessary output. Every Toyota/Lexus hybrid uses a power-split hybrid, as do the units in the Ford Fusion and C-Max, Lincoln MKZ, Nissan Altima, Infiniti M35h, VW Jetta and Touareg, BMW ActiveHybrid 5 and 7, Mercedes S400, Porsche Cayenne and Panamera, Hyundai Sonata, Kia Optima, Audi Q5 Hybrid, etc.

The two-mode hybrid that has been used by GM, BMW and Mercedes in some trucks and SUVs, on the other hand, adds two planetary gear sets and four clutches to allow these vehicles to operate in full-electric, full-combustion engine, or blended (electric and combustion engine) modes. The unique towing and payload requirements of light trucks spurred GM to adapt its Allison two-mode bus transmission for use in light trucks. And though it delivers up to 25% greater efficiency than a non-hybrid truck, the cost per unit is greater than the high-torque, eight-speed planetary automatic transmission BMW has switched to. Mercedes now relies on seven-speed transmissions and diesel models to replace its ML-Class hybrid. Nevertheless, the design blends electric and combustion power to cope with both low- and high-speed operation, while allowing the use of smaller motors than single-mode systems. It’s currently available on the Chevy Silverado, Tahoe and Suburban; GMC Sierra and Yukon; and Cadillac Escalade, though for how much longer is anybody’s guess.

This is the one that has become synonymous with “hybrid”: the power-split hybrid under the hood of the Toyota Prius.

Electric motors have high power-to-weight ratios and, when sized properly, can provide sufficient torque over a wide speed range to replace a multi-speed transmission with a simple constant-speed unit. At their most basic, series hybrids use the combustion engine to drive a starter-generator that provides power to the electric motor(s). Adding plug-in capability allows the storage batteries to be charged off the electrical grid, providing for some level of gas- or diesel-free travel. When this limit is reached, the combustion engine engages to drive the starter-generator in order to charge the battery pack and drive the wheels.

Chevy’s Volt has four operating modes and can function as a battery electric vehicle, series hybrid and power-split hybrid. As a single-motor electric, it runs on battery power, producing a maximum output of 111 kW. When the battery is depleted, and speeds are not too high, it goes into single-motor extended operation, and uses the second electric motor as a generator for battery charging. In this mode, the main traction motor can provide full output for short bursts, but not for sustained driving. Dual-motor electric mode engages the second motor and planetary gearset to reduce the speed of the primary electric motor at higher speeds in order to improve efficiency and mileage without increasing output. This can move to an extended range  mode where the two motors are engaged, but the gasoline engine helps drive the wheels through the planetary gearset. Under these conditions, the powertrain has the same output as in dual-range, but draws less power from the batteries in order to extend the vehicle’s range.

And while the Chevy Volt/Cadillac ELR and Fisker Karma are the only plug-in series hybrid vehicles on the market, they may not be the last. As legislation pushes automakers toward low CO2/high fuel economy solutions, series hybrids may become more plentiful. Look for automakers to follow BMW’s lead with its iSeries vehicles and add small range extender engines to electric vehicle drivetrains in order to eliminate range anxiety, increase sales and amplify mileage credits.  By designing this engine to operate at high efficiency during normal and maximum charge events with a minimal NVH signature, it removes the inefficiencies of the power-split hybrid motors, which have to run at a wide range of speeds, and opens the possibility of turning its production and supply over to third parties specializing in this technology.

Way Back in the Day

Although hybrid vehicles may seem like a contemporary development, the Lohner-Porsche Mixte car of 1901-1905 had individual front wheel-hub motors. They weighed nearly 700 lb. each.