A Manager's Guide to FlexRay

Here's what you need to know about the new communications protocol that will make X-by-Wire more pervasive.
#Bosch #Intel #Motorola 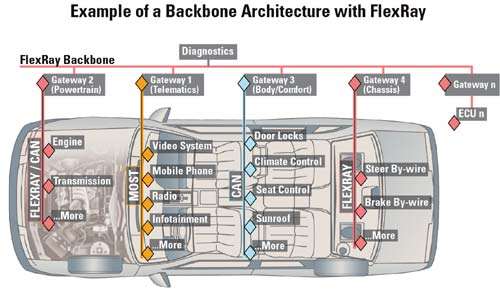 A not-so-funny thing is happening as all the automakers work toward installing "X-by-wire" systems, such as drive-by-wire and brake-by-wire. Conventional mechanical and hydraulic systems can only go so far. Likewise, the in-vehicle serial data buses that pass electronic signals between a vehicle's electronic control units (ECU) and associated electronic devices can no longer cut it.

So, a change is afoot, and that is FlexRay—a new communications protocol designed for the high data transmission rates required by advanced automotive control systems. These are the same control systems that, in the next few years, are expected to replace nearly every hydraulic line and mechanical cable in today's automobiles with wire-based networks, sensors, and actuators.

By the way, FlexRay should also simplify automotive production.

Getting to the limits of technology

In the not-too-distant future, says Ben Baker, director of Electrical Product and Processes for General Motors Corp. (Warren, MI), sensors on the vehicle might detect a panic situation—a stopped object, whether another car, a tree, or a person—approaching at a rapid rate while you're twiddling with the radio. Intelligent, electronically based "anticipatory braking" might "decide" to initiate a 0.2-g stop to get your attention—and to help stave off a major collision. Doing this with hydraulics is difficult. Keeping brake pressure balanced on all brake pads in a vehicle is so much easier in a system of sensors, actuators, servos, electronic controls, and software.

Another automotive system going electronic is powertrain. For example, very fast, very reliable electromagnets, not a camshaft, will eventually control the valves in tomorrow's powertrains.

In the meantime, more and more sensors are being sprinkled throughout vehicles, especially sensors that look outside: at street surfaces and at obstacle in front, beside, and behind the vehicle. These sensors include video, radar, and photoelectrics, which both capture and transmit a colossal amount of data in real time for the ECUs within the car.

Last, there's the reality that the automakers, says Baker, "haven't been able to figure out how to do diagnostics through hydraulic fluid." Electronic diagnostics will provide a "higher fidelity level on each of the components," he continues. Better diagnostics through electronics will become tomorrow's maxim.

Some of these advanced applications exist now. Throttle-by-wire, also called "drive-by-wire," has been in diesel-fueled cars for about five years. Some high-performance gasoline-fueled cars, like the Corvette, have had it for three years now. Luxury carmakers such as BMW, Mercedes, and Audi are planning to introduce brake-by-wire in the 2004 model year.

For these automotive applications to become commonplace, a number of protocol requirements must exist. Enter FlexRay. FlexRay is a communication system developed by a consortium founded in 2000 by BMW, DaimlerChrysler, Motorola, and Philips Semiconductors. In 2001, Robert Bosch GmbH and General Motors joined the consortium. So did Ford Motor Company this past June. The consortium members realized that despite the numerous automotive communications protocols out on the market—most from Europe, most in or just out of development—none would fulfill future automotive control requirements. Even the computer communications protocols don't suffice. "None of them are automotive qualified," explains Andreas Both, business and technology manager overseeing FlexRay for the Semiconductor Products Sector of Motorola (Munich, Germany). That is, they are not qualified for automotive operating temperatures and electromagnetic compatibility requirements. (Remember hearing spark plugs fire through your aftermarket AM radio?)

FlexRay is aimed at the automotive market. No royalties will have to be paid for automotive applications. Prototype implementations of FlexRay-based chips are available for FlexRay Consortium members. First silicon of protocol engines will be available in early 2004; qualified silicon is scheduled for late 2004. Engineering samples of the electrical physical layer will be available from Philips Semiconductors in the second quarter of 2003; product parts by the end of 2004. First series production cars with FlexRay are expected around 2006.

The price of FlexRay devices, as with any semiconductor device, depends on silicon size, chip test efforts, commercial relationships with customers, and other criteria. None of these are fixed just yet.

For more information about the FlexRay Consortium and its FlexRay communications protocol, trawl over to www.flexray.com. Read the FAQ; it's excellent. For additional information or if you have specific questions, send an email to request@flexray-group.com.

FlexRay is an open, common, scalable electronic architecture for automotive applications. It can operate in single- or dual-channel mode, providing redundancy where needed. It allows both synchronous and asynchronous data transmissions. With the former, other nodes on the network receive time-triggered messages in a predefined latency time. With the latter, messages get to their destinations quickly or slowly, depending on their priority. Currently, FlexRay can handle communications at 10 Mbps—the speed of your typical low-end home-computing local area network. Motorola's Both is quick to add that this standard doesn't mean that 10 Mbps is enough forevermore. Instead, it is fast enough for the foreseeable future, given the applications automakers have envisioned thus far.

Last, FlexRay's clock synchronization mechanism aptly handles cheap clock oscillators, namely those made out of quartz. And that synchronization, as with all of FlexRay, is fault tolerant. For example, FlexRay automatically and digitally compensates for the differences in the variety of quartz clocks running on the network, as well as in their slight changes in clock frequencies. This clock synchronization is a distributed mechanism; there's no master timekeeper here. So if one node fails or for some reason is taken off the network, the other nodes will continue to operate in synchrony.

(Insofar as the fault tolerance of motors and sensors, the normal rules of reliable systems design applies. For example, in a steer-by-wire system, the sensor system in the steering wheel will be a redundant array, with two or three sensors providing the same signal. A judging algorithm in the electronics will then determine the validity of the signals; that is, it will determine whether all three sensors are providing the same information, or at least two of the three.)

Along with making X-by-wire control possible, FlexRay offers other advantages. First, "any time you can get the control mechanism closer to the actual mechanism you're trying to control, that's a performance enhancer," says Baker. Second, FlexRay helps eliminate the amount of mechanical space required for hydraulic fluid systems—systems that will be totally replaced by electronics. Third, continues Baker, FlexRay "provides the flexibility needed to simplify integration with current control system, reducing overall system complexity." Therein lies a major advantage. Both OEMs and automotive suppliers are saying, says Both, "`We don't need more [communications] technologies. We need less technologies that are more versatile.' They want technologies that can be used over a range of applications." That is, rather than have one by-wire protocol for steering and another for powertrain, FlexRay aims to be the protocol for all the applications. That's one protocol applied across platforms, across assembly plants, across regions.

Certainly large dollars savings will come from ripping out hydraulics and hydraulic installation equipment from automobiles and automotive assembly. Granted, today's hydraulic systems and conventional chassis systems perform "admirably," Baker is quick to point out. But let's be frank: with fluids sloshing around containers, bunches of fittings, and thin steel or plastic pipes, hydraulic systems are complex, moderately fragile, and messy. Hydraulic parts must be connected correctly; absolutely no leaks allowed. In a classic bit of understatement, Baker murmurs that hydraulics are "kind of a pain in the career."

Assembling electronic systems is much easier. "We believe there is a benefit to being able to put two snap connectors together rather than having to carry tools to hook up tiny hydraulic lines." If that hydraulic line should get bent or kinked, either the fluid won't pass or eventually the line fails. Compare that to shielded wire. Electrical wires and harnesses can accommodate vibration and a fair amount of abuse. "Electric cable can be bent, even doubled upon itself," explains Baker, "and the electrons still have a way to sneak through."

Obviously, if you don't have to put parts in the car—specifically mechanical and hydraulic parts—you don't have to pay for them. So, the betting is that overall, both in component and overall assembly costs, electronic systems will be less expensive than their mechanical and hydraulic counterparts. This is especially true where multiple configurations are involved. Take, for instance, ABS modules for 2-wheel and 4-wheel drives. Rather than have separate modules consuming factory floor space, different FlexRay-based ABS can be configured by some Intel-inside computer sitting where inventory and assembly robots used to sit.

In conclusion, says Baker, "anytime you're building something, whether kitchen cabinets or cars or trucks, your engineering and design goals should be to make sure the materials and processes you use are forgiving. Generally, FlexRay-enabled electrical systems are a lot more forgiving than hydraulic or mechanical linkages."