A New Term to Get Used to: “Disownership”

The way people are going to get transportation is changing the world over. Get ready for it.
#AlfaRomeo #Tesla #Amazon

Last night in London, at the National Gallery, in a presentation coordinated with the “Leonardo: Experience a Masterpiece,” Klaus Busse, vice president of Design, FCA EMA Region, made a speech during which he quickly did a sketch of the Alfa Romeo Tonale, a concept crossover that Alfa introduced last year. 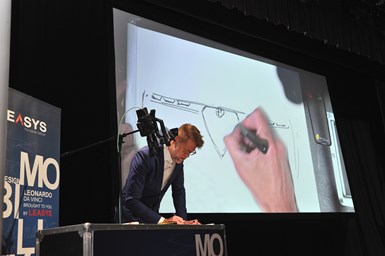 The reason Busse was there is because Leasys was touting its growth in the U.K. market. (It also happens to be one of the supporters of the Leonardo exhibit.)

Leasys? Yes, that’s what we wondered. It is a subsidiary of the FCA Bank, which is a joint venture between FCA and Crédit Agricole Consumer Finance.

As for Leasys, it operates in eight European countries and plans to add five more next year and to have a fleet of 450,000 vehicles.

According to the company, it provides “short/medium/long-term rental, car subscription, car sharing, e-mobility with charging stations to be made available shortly, online mobility purchases through Amazon, and all the financing and insurance services of FCA Bank.”

While this might have otherwise gone unremarked, that “online mobility purchases through Amazon” certainly is something to think about. Clearly something that could be incredibly disruptive. (Although the U.S. state franchise laws are such that auto dealers are fairly well protected—for now. Tesla has been working hard in courts to get its products into the hands of consumers without dealerships, which seems to be succeeding in many instances, most recently in Michigan.)

Leasys CarCould “turned the disownership and digitalization trends into some of its main strengths.”

Late last year in Italy it launched Leasys CarCloud, which allows subscribers who pay a fixed monthly fee to have access to various types of vehicles in the major Italian cities as needed. While this is something that we’ve seen from some companies in the U.S. with varying levels of success (e.g., Book by Cadillac shut down in December 2018 but according to its website it will be debuting a new program in early 2020).

What is fascinating about the approach they’re taking is encapsulated in a line from the announcement regarding the event at the National Gallery. Describing why the company has gained customers in the U.K., it says that it “turned the disownership and digitalization trends into some of its main strengths.”

Which is a term that is likely to become more widely used.

Consider this: according to the folks at Kelley Blue Book, who know a thing or eight about these things, in December 2019 the estimated average transaction price—the amount that people are paying—for a light vehicle in the U.S. was $38,948.

And that figure was after dealer discounts. According to Tim Fleming, analyst for Kelley Blue Book, “as retail demand fell in 2019, dealer discounts grew, approaching 7% of MSRP in December – the highest since July 2009.”

Odds are, the number of people who are going to be able to afford a new vehicle has an inverse relation to the prices.

We’re not likely to see Leasys or its CarCloud in the U.S., especially with the proposed merger of FCA and PSA (which is offering its Free2Move carsharing service).

But we are likely to see massive changes in the way people access their modes of transportation.