A Professional Grade Bed for the GMC Sierra

Staying with yesterday’s carbon fiber theme. . .GMC has announced that the Sierra Denali 1500 and the Sierra AT4 1500 will be available in early June (in limited numbers, initially, with wider availability next year) with a carbon fiber bed.

As Duncan Aldred, vice president, Global GMC, put it, “CarbonPro is made of the same raw material found in seven-figure super cars and even aerospace applications”

Yes, a carbon fiber bed for the pickup box. 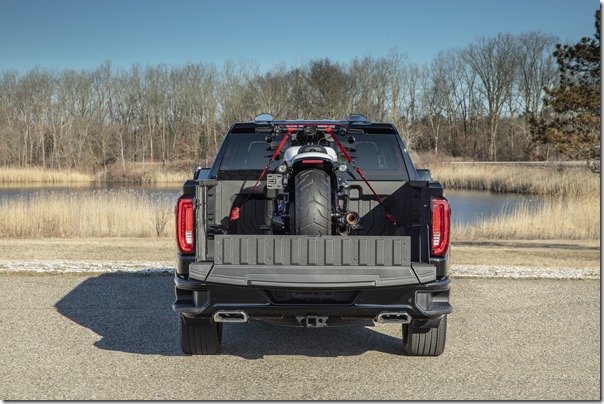 It weighs 25 percent less than a “traditional steel” bed, which means a mass save of some 60 pounds. This allows the load to be increased by about the same amount.

In addition to which, there is no need for bed liners, another weight save.

It doesn’t need to be painted, which is a process benefit, and the surface is engineered so that the texture provides traction.

What’s more, the CarbonPro bed design adds one cubic foot of cargo volume to the truck compared to models with the roll-formed steel beds. This is a consequence of the ability to push out the sidewalls of the box because of the formability of the carbon fiber composite.

Of course, there is the issue of dealing with things that pickup truck beds deal with on a daily basis.

So they performed drop tests, including the repeated dropping of cinder blocks, 1,800-pounds of gravel, and 450-pound water-filled steel drums on the beds.

They aimed the exhaust of a portable generator at a corner of the bed to determine whether the heat of the exhaust and the vibration of the generator would degrade the bed.

Because of the dent-resistance of the material, there is no additional wheelhouse liners installed in the factory for the rear wheels.

Clearly, if composite material can make it there, they can pretty much make it anywhere when it comes to performance.