GM sees an all-electric future. It must have quite the telescope
#Cadillac #Tesla #Chevrolet

Today Mark Reuss, GM president, announced that the company is investing $2.2-billion in the Detroit-Hamtramck assembly plant so that in about 19 months from now, the plant will be a dedicated electric vehicle assembly plant, the first such plant in the GM portfolio. 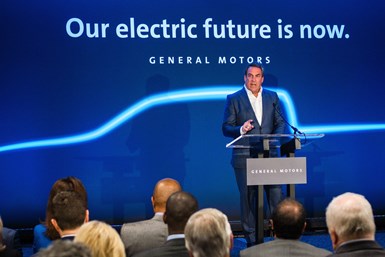 Presently the Cadillac CT6 and the Chevrolet Impala are built at the plant. That will end at the end of February, at which time the plant will be retooled over an 18-month period. The first product is a battery-electric pickup. Then at some point (“soon after,” according to GM) the electric, automated Cruise Origin, will be built there.

Because GM, as part of the settlement with the UAW that held a 40-day strike against the automaker, said it would be investing $3-billion in Detroit-Hamtramck, know that the company is investing $800-million in supplier tooling and related projects.

Reuss said: “Through this investment, GM is taking a big step forward in making our vision of an all-electric future a reality.”

Let’s face it: with the constant buzz about Tesla and the seemingly ever-increasing valuation of the EV maker; with the growing buzz about Rivian and cross-town rival Ford’s affiliation with the seemingly new darling of the electrocenti, the people at GM know they need to do something fast and big. And $2.2-billion in a 4.1-million square-foot plant with a transformation of a year-and-a-half checks the boxes.

That said, the EV market—Tesla notwithstanding—is still rather miniscule, and as more products are put on the market, unless there is a shift in customer demand—a shift greater than 2.2-billion and 4.1-million, contextually speaking—it is going to be hard going trying to get any volume for a given vehicle.

While the pickup market is certainly humongous enough such that there can be bigger electric sales numbers than any of those just mentioned, it is still going to be a comparatively small number.

And does anyone realistically think that the Origin is going to have numbers that are within the rounding error of a Chevy Silverado?

But as for Reuss’ “all electric future”. . .that’s a potential reality that won’t exist for quite some time to come.