One of the challenges that MINI faces is that when the brand was resurrected by BMW in 2000-2001, small cars actually had market appeal and the MINI Hardtop of that period was nothing if not appealing. Now, of course, it is almost all about bigger and crossovers, which MINI has addressed with the Clubman (larger) and the Countryman (a crossover).

Still, there is something to be said for the small, fast, and nimble among the more enthusiastic of drivers (for whom bigger and crossover may be synonymous with “boring”), and so MINI hasn’t given up on them, although their numbers may be few.

The company is now in the midst of what it calls a “crucial phase” of “serial production development” for the MINI John Cooper Works GP, which is slated to go on the market next year. 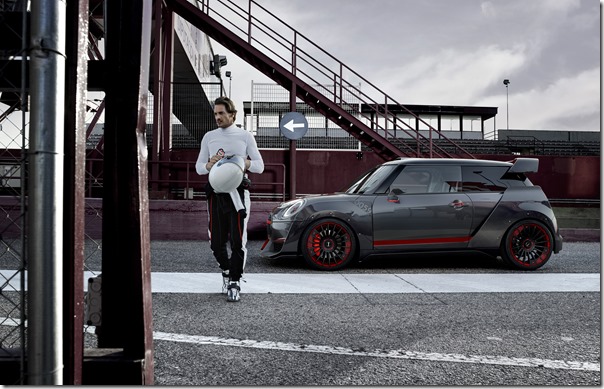 This is the current-generation MINI John Cooper Works GP. It will be replaced in 2020 by a more powerful one. And someone will probably wear a helmet driving it, too.

The vehicle, which we’re told is “likely” to be based on a two-door hardtop, as was the John Cooper Works GP Concept that it unveiled at the 2017 Frankfurt Motor Show, will be fitted with a turbocharged 300-hp, four-cylinder engine.

About that “critical phase”: they’re testing it out on the race track. (The previous generation MINI John Cooper Works GP ran an 8:23 at the Nürburgring-Nordschleife.)

And about the small but enthusiast number of people who are interested in vehicles of this nature: the production will be limited to 3,000 cars.

And if you’re interested, be on your game, because according to MINI’s Thomas Giuliani, vice president Product and Launch Management, “We are well aware of the enormous fascination exercised by the MINI John Cooper Works GP, not just from the euphoric reactions to the concept vehicle but also from past experience: after all, every one of its predecessors was completely sold out even before the official market launch.”