If you’re interested in what 3D/additive can/can’t do, then you might want to attend the Additive Manufacturing Workshop for Automotive, that is being held at the first industry day of the North American International Auto Show (NAIAS), January 16, in Cobo Center.
#oem #Volkswagen #MINI

It wasn’t all that long ago that 3D printing was one of those things that maybe someone who works in the R&D staff dealt with or related to a machine that designers were using to make physical properties of things that the would use in their presentation to management (“See, the knob would look like this.”). Then it became the technology that everyone was talking about, the stuff of segments in news broadcasts and feature stories in consumer publications (“Why 3D Printing Will Revolutionize Your Dental Experience”).

Then 3D printing gained more traction and suddenly there were companies like GE getting into it in a big way, producing things like turbine blades with the technology, geometries that are otherwise challenging to create.

The term “3D printing” then gave way to “additive manufacturing,” as though (1) people had thought of machining as “subtractive manufacturing” (which is a term that’s actually used, although not by ordinary people who are associated with metal removal) and (2) there was a sudden change such that it had gone from mere “printing” to full-bore “manufacturing,” challenging those machining centers or injection molding machines. 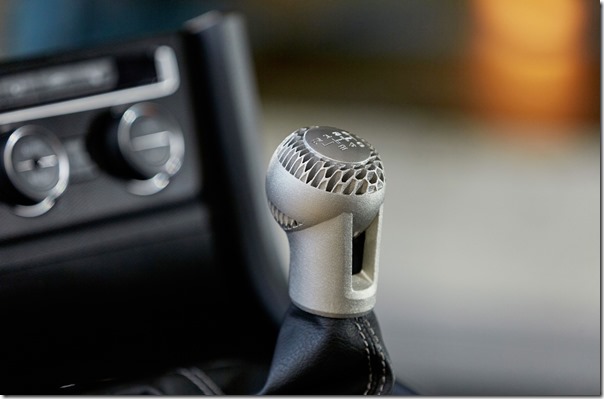 A 3D-printed Volkswagen shift knob.  if you look closely you can see that this is for a six-speed manual, not a DSG or step-gear automatic. Which means a comparatively low take rate. Which, at least at this point in time, is well-suited to the additive process.

Without question, 3D/additive have come into their own in automotive. There are still the classic cases, the demonstration model or the printing of a component—like an (cold) air intake—for use in vehicle testing. But there is an increasing number of applications for the process that are end products that customers can get for vehicles built by companies including MINI and Volkswagen, as well as Ford.

It’s not like milling or molding machines are going to be going away anytime soon. But the new equipment is another tool that can be productively and profitably deployed. And like any other tool, it order to achieve the benefits it is necessary to understand what it is well suited for doing and not trying to deploy it where it isn’t appropriate.

Analogy: Once industrial robots were tried in all kinds of tasks that they weren’t—at that point in their development and at that point of application engineering understanding—right for. So they didn’t work out as planned. And people became unhappy with the results. However, those that did understand the right way to use the early robots did well and as time went on, they did much better.

And so the same will be the case for 3D/additive, which seems to be on the same sort of technology development curve that robots once were.

If you’re interested in what 3D/additive can/can’t do, then you might want to attend the Additive Manufacturing Workshop for Automotive, that is being held at the first industry day of the North American International Auto Show (NAIAS), January 16, in Cobo Center. It is a half-day program organized by Automotive Design & Production’s sister publications Additive Manufacturing and Modern Machine Shop, so we are more than confident that the content will be up-to-date, relevant, useful, and deployable.