“Direct coating is a promising solution for a wide variety of decorative and functional automotive trim components.”
#Hyundai #Covestro 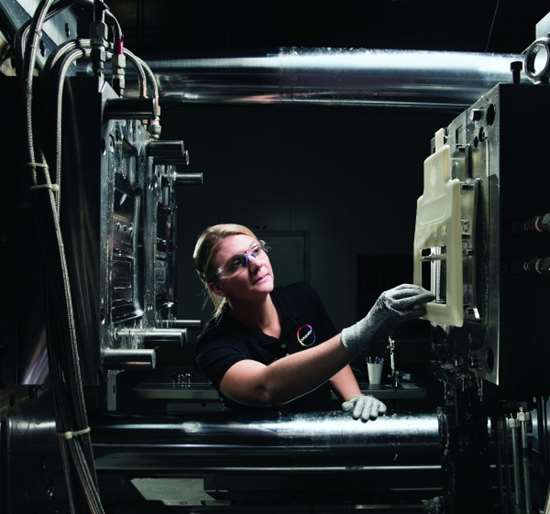 The people at Steinway should have probably patented the term, because when it comes to interiors, “piano black” is becoming the trim of choice, and it also is finding an increased number of exterior applications, as well. However, it seems that achieving that dark, shiny surface is somewhat challenging using the conventional three-layer coating process.

Engineers at Hyundai America Technical Center, Inc. (HATCI) worked with those from materials company Covestro (covestro.us) on using what’s known as “direct coating,” a new process that combines conventional thermoplastic injection molding with reaction injection molding (RIM) in a single tool such that a hard polycarbonate blend substrate with an ultraviolet-stabilized, scratch- and chemical-resistant polyurethane coating—with the piano black surface—is achieved.
According to Amanda Nummy, materials engineer, HATCI, “Direct coating is a promising solution for a wide variety of decorative and functional automotive trim components.”
The prototype arts they produced were made with a Covestro PC+ABS blend and commercially available aliphatic polyurethane coating raw materials.
Reportedly, advantages of the direct coating approach include cost reduction and the elimination of a need for painting.