Acura: Getting Back to Engineering

Although it was the first Japanese luxury brand in the U.S. market, Acura has not gained the sort of traction that a first-mover might achieve. So with the ILX and new RDX it is working to improve its momentum.
#Infiniti #Honda #Audi 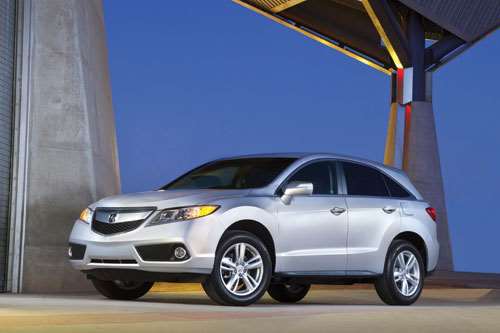 Although the second-generation Acura RDX is slightly larger on the outside than its predecessor, it is notably roomier on the inside, providing what chief engineer Ichiro Sasaki calls “high-density packaging”: plenty of room in a comparatively small space. 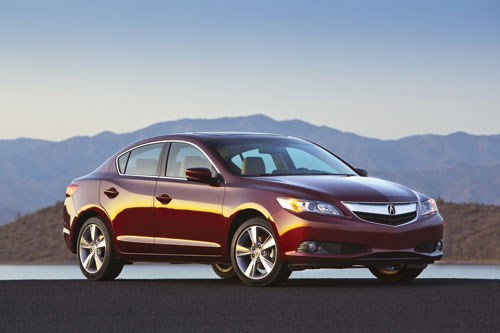 Working to appeal to a younger demographic, one that might have once gone for an Integra or RSX, Acura has developed the ILX. It is available with a 201-hp 2.4-liter with six-speed manual, a 150-hp 2.0-liter with a five-speed automatic (this is the volume model, by far), or a 111-hp 1.5-liter hybrid—Acura’s first. 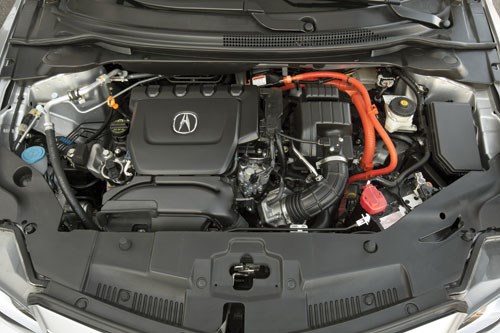 The Acura ILX hybrid system. According to Takeshi Nakamura, the powertrain setup for the hybrid is calibrated so that when driving in cities at low speed, it provides the same sort of acceleration response as an Acura TSX. 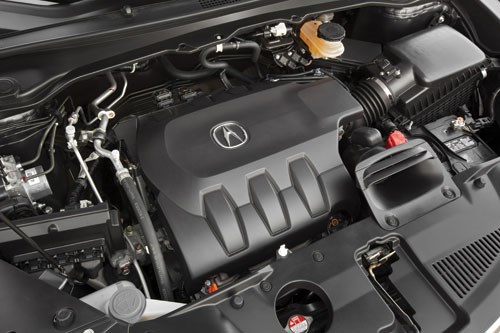 The first-generation RDX had a turbocharged four-cylinder engine. Nowadays, that seems to be the type of engine that more OEMs are turning to for purposes of performance and fuel efficiency. The 2013 RDX has a normally aspirated V6. Not only is the engine more powerful, but it provides better fuel efficiency. Go figure.

When Acura, the first Japanese luxury brand, emerged in the U.S. market on March 27, 1986, the Legend sedan was introduced. Which is sensible. A luxury sedan for a luxury brand. But there were a couple of other cars that were introduced on the same day: the Integra 3-door and the Integra 5-door. While the Legend was the car for people who would be inclined to read The Wall Street Journal, the Integra was more for those who would read Rolling Stone.

Since the end of the RSX, while there is the spirited TSX, the brand has been more oriented toward things less oriented to the youthful market that the Integra and RSX embraced. RL. TL. ZDX. MDX. Bigger vehicles for a more prosperous set.

Jeff Conrad, vp and general manager, Acura, admits, “We moved away from our roots.” He’s referring to the Integra and RSX. He explains that like other companies in the lux arena, there was a move upward in the market. “It made sense to do that.”

So what they did was develop a new car. A new sedan. A sedan for those who might not have a fully robust 401K plan. Yet for those who might. A sedan that actually has something of a bimodal appeal. On the one hand, it is identified by Lee DaSilva, senior product planer for the Acura ILX, as being for those within the Gen Y cohort (born between 1978 and 1994). And on the other, it could have appeal to the Baby Boomers, those who were born between 1946 and 1964. As DaSilva explains, it is developed for those who are getting into the luxury market as well as having appeal for those who are beginning to look for something that’s more manageable than a full-size sedan or big SUV.

The phrase “You can sell an older person a younger person’s car but not a younger person an older person’s car” was undoubtedly an underlying consideration for Takeshi Nakamura, ILX large project leader (a.k.a., “chief engineer”) and his team during the development of the car. Nakamura says that they considered it “a gateway vehicle.” They thought about someone in Gen Y who had “left school, joined the work force, and is doing well.” They are “interested in fashion.” Have an urban orientation. And have social and environmental concerns. The development theme, or “grand concept,” in Nakamura’s nomenclature, is “High profile, smart sedan.” No, he doesn’t mean that the ILX is tall (it has an overall height of 55.6 in. and actually has a flowing roof line and a low, planted stance), but that it is a car that should stand out, even though it is comparatively compact: overall length, 179.1 in.; wheelbase, 105.1 in.; width, 70.6 in. The design concept for the car, Nakamura says, is “Aero-fused dynamics.” As for the “smart” part, yes, it is fully equipped with all manner of de rigueur infotainment (e.g., Bluetooth hands-free telephone interface and audio interface; USB port interface; Pandora radio; SMS text interface) and advanced functions (e.g., electric power steering with torque sensing; multiview rear camera; amplitude reactive dampers [using a second spring floating valve above the conventional main piston valve, they are able to achieve a smoother ride—as in absorbing small bumps—and better driving dynamics—as in aggressive cornering]). Presumably, the other part of “smartness” relates to the fact that there are three powertrains available, including Acura’s first hybrid.

The standard powertrain is a 2.0-liter single overhead cam inline four that produces 150 hp @ 6,500 rpm and 140 lb-ft of torque at 4,300 rpm. The aluminum engine features spin-cast cylinder sleeves; a two-stage abrasive machining process (plateau honing) is used to assure there is an ultra-smooth surface between the cylinder wall and the pistons. The pistons that run in those sleeves feature a molybdenum outer coating that is applied in dots to the surface of the aluminum piston to assure reduced friction. The piston rings are ion-plated, again as a friction-reduction effort. The engine is mated to a five-speed automatic transmission with paddle shifter capability. The EPA estimated fuel economy is 24/35/28 mpg city/highway/combined.

Harkening back to the RSX is the ILX with a 2.4-liter dual overhead cam four that produces 201 hp @ 7,000 rpm and 170 lb-ft of torque @ 4,400 rpm. From an engineering point of view, it is similar to the 2.0 (e.g., aluminum block and head; exhaust manifold integrated into the head). Just as the 2.0 is available only with the five-speed automatic, the 2.4 is available only with a short-throw six-speed manual transmission. The EPA numbers are an estimated 22/31/25 mpg.

Then there is the hybrid. The system is based on a 1.5-liter four cylinder engine and 17.2-kW brushless DC electric motor that produce 111 hp @ 5,500 rpm and 127 lb-ft of torque @ 1,000 rpm. There is a lithium-ion battery pack used to store electricity for the motor. There is a continuously variable transmission. The EPA numbers are an estimated 39/38/38 mpg. While this is Acura’s first hybrid, it is the fifth-generation Honda hybrid system, the same that is used in the Honda Civic. Nakamura points out, however, that the ECU for the hybrid is specifically calibrated for the ILX, biasing it for easier driving in city conditions.

From a materials standpoint, all ILX models feature an aluminum hood and an aluminum front bumper beam; the hybrid also has an aluminum rear bumper beam. But it is really a study in the use of high-strength steel, which represents 59% of its body structure. 780 and 980 grades are used for the cross member beneath the driver’s seat and inside the door sills. 590 is used for the side sills, A- and B-pillars, windshield header, forward parts of the unit body, rear cross member, and central tunnel. 440 is used for the front bulkhead and brackets in the lower part of the unit body. And traditional 270 grade steel is used in front on the engine, on top of the front bulkhead, and for most of the rear of the vehicle.

The ILX is manufactured at the Honda Greensburg, IN, assembly plant, which also produces the Honda Civic.

But in addition to the small sedan, there is, as Jan Moore, an Acura senior product planner, says, “dramatic growth” in the entry premium crossover utility segment of the market, with the likes of the Audi Q5, BMW X3, and Infiniti EX35 doing well. This is the segment that the Acura RDX competes in.

The first-generation RDX appeared as a model year 2007 vehicle (see: 66.192.79.249/issues/0606.html). Just as Nakamura references the urbanites for the ILX, the original RDX was hard-core downtown scene. Thomas says that when the first RDX was being developed, they imagined the buyer. His name was Jason. He was 30ish. An architect. He lived downtown. Moore candidly admits, “People like Jason aren’t as interested in this type of vehicle as we thought.”

So they made a reset. This time it would be a couple. This 2013 RDX would be the first car they’d buy together. They’d live in the suburbs and work in the city. They’d want capacity for things like home-improvement projects. (And when they go on to have a family, there would be the bigger Acura MDX. And when the kids left, back to the RDX.)

One of the more notable aspects of the original RDX is that it features a 2.3-liter turbocharged four cylinder engine that produces 240 hp @ 6,000 rpm and 260 lb-ft of torque @ 4,500 rpm. It was Honda’s first turbocharged gasoline engine. But that engine is replaced in the new RDX with a 273-hp normally aspirated V6. The engine, explains Ichiro Sasaki, large project leader for the RDX, is actually more efficient than the turbocharged four. The highway mpgs are up by 5 and the city by 2 (for the all-wheel-drive versions of the RDX, the estimated city/highway/combined figures are 19/27/22; they are 20/28/23 for the front-drive vehicle).

This is predicated on a couple of things. For one, the previous RDX has a five-speed automatic. The new one has a six-speed. Additionally, this is the first Acura to feature Honda’s second-generation Variable Cylinder Management (VCM) system. This system allows the engine to run on all six cylinders—such as when doing a cold start up or during acceleration—or four cylinders—as in moderate throttle conditions—or even three cylinders—during light throttle.

When cylinders are deactivated, the valves remain closed and the fuel injectors don’t squirt, but the spark plugs continue to fire so as to minimize plug temperature loss and to prevent fouling of the plugs that could occur during cylinder reactivation if there were incomplete combustion.

Physical control is provided via spool valves that control the rocker arms via oil pressure; when cylinders are to be deactivated, the oil is rerouted so that
there is no valve opening for that cylinder.

To assure that this is transparent to the driver, the VCM system monitors parameters including vehicle speed, engine speed, throttle position, engine load, and transmission gear; it adjusts, as necessary, ignition timing and throttle position and determines if torque con-verter lock-up is required.

Sasaki describes the 2013 RDX as providing “high-density packaging, a small exterior body with roomy space on the inside.” Consider the dimensions of the 2012 and the 2013 RDX:

Presumably that young couple is going to be making a lot of runs to Home Depot.