CUPRA, the performance brand of SEAT, competes in the Touring Car Racing (TCR) series, campaigning a Leon Competición. According to the company, a big role in developing the new vehicle that was introduced in February 2020 was the use of additive manufacturing. 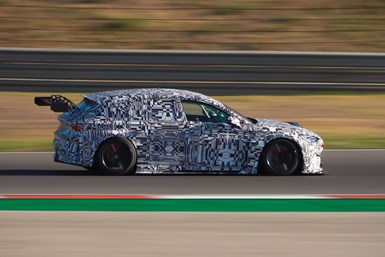 The CUPRA Leon Competición will be campaigned in the TCR series. (All Images: CUPRA)

As Xavi Serra, the head of technical development at CUPRA Racing, explains, speed and flexibility are key: “The main goal is to have a lot of parts in a short time. We can quickly test a wide variety of designs and furthermore, since vehicle development is now done in parallel, this technology enables us to react swiftly to any changes in the design process.” Installing a grille that was produced with the HP Jet Fusion 5200 system.

One of the interesting components developed was a sideview mirror. According to the TCR rules, the door mirror must have the same shape as the production car. That would have been easy to do (after all, the design of the production vehicle exists, so all they’d have to do is replicate it). But the CUPRA team wanted to do more.

Serra: “We wanted to add an additional function, which is to cool the driver. We therefore had to design an air intake in the maximum pressure zone to achieve this effect.” So they printed the parts, then tested them in the wind tunnel to see whether they would perform as required. “The bigger the variety of parts we can test in this facility, the better. It enables us to make much faster progress,” he says. The side mirror before the glass is installed. Notice the air vents that are produced, with the air being channeled through the housing to cool the driver.

And beyond the wind tunnel, they actually put the 3D printed components on the track, putting the Leon Competición through its paces at the Portimao track in Portugal.

According to Serra, “The results were excellent, and some were even surprising, because we were looking to push the material to its limits.”