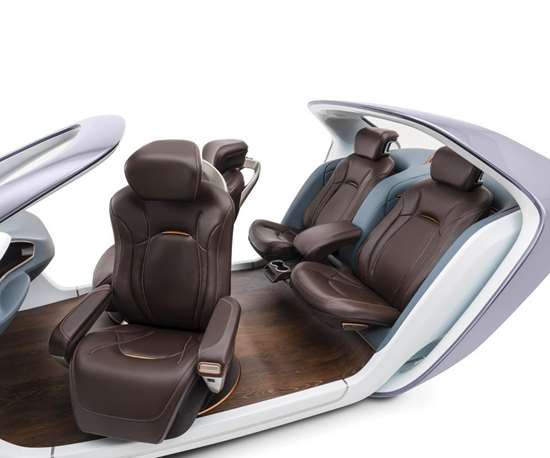 In this series of three images, notice how the driver’s seat in this AI17 Adient concept moves toward the outside to greet the driver, then the two front seats are able to pivot toward one another for easier conversation—of course, this is an automated vehicle, so the conversation can occur while the car does the driving. The second row indexes upward to provide storage should it be required. 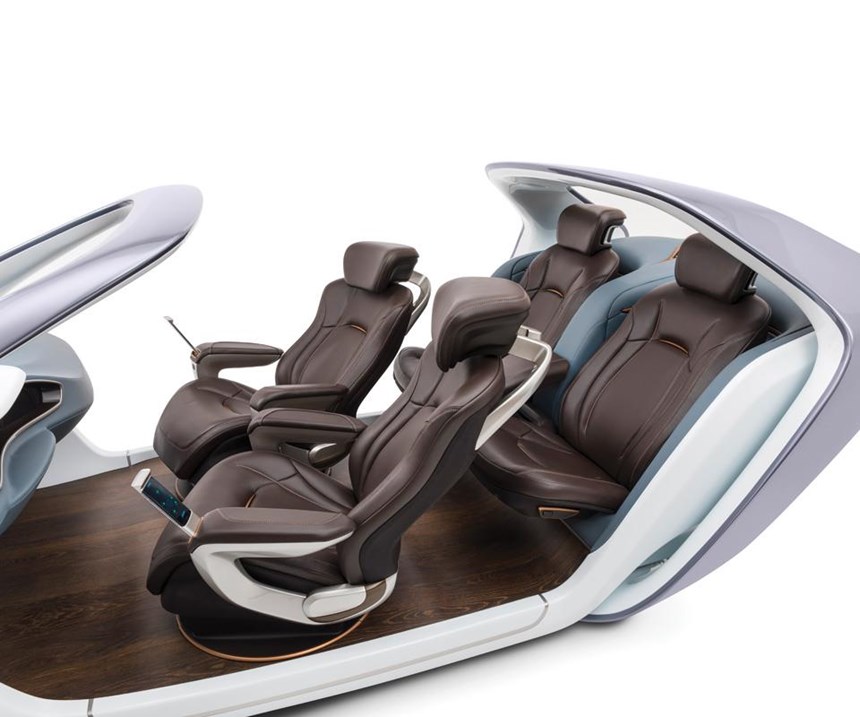 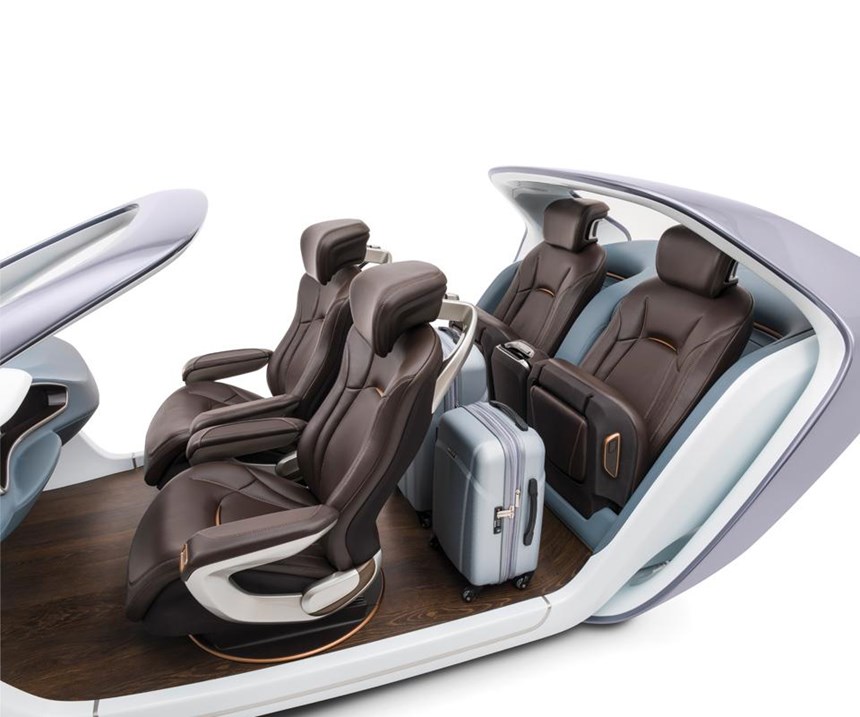 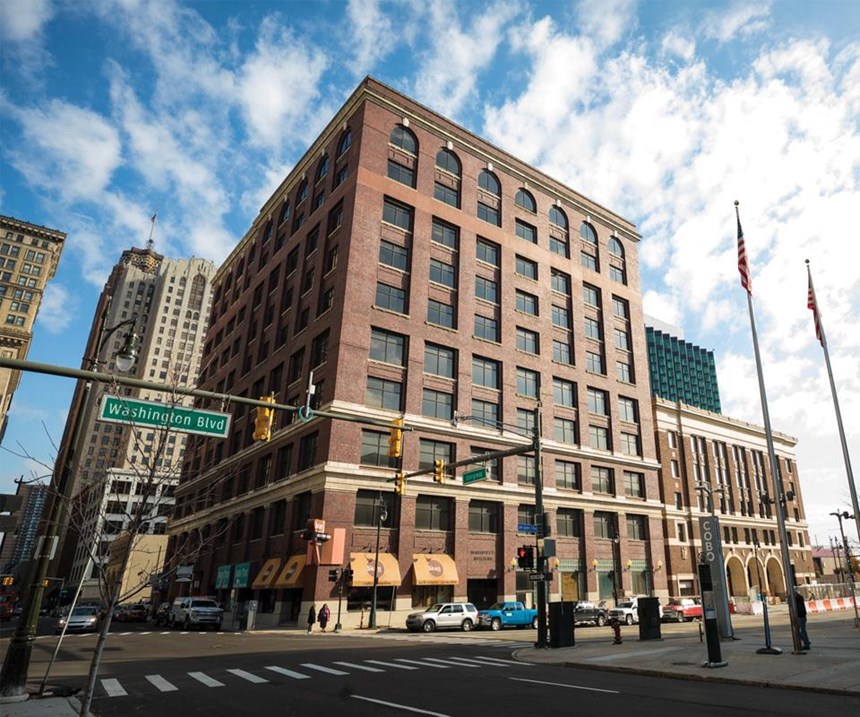 Within a month of its separation from Johnson Controls International and becoming its own company in the fall of 2016, Adient acquired the 10-story Marquette Building in downtown Detroit to create its new global headquarters.

On October 31, 2016, the company previously known as “Johnson Controls Automotive Experience” (JCI) became a new company, Adient (adient.com). With the ringing of a bell on the New York Stock Exchange, there was suddenly an automotive seating supplier with 75,000 employees operating in 230 plants in 33 countries worldwide.

In the United States, where Adient is based (the company’s headquarters are presently in a western suburb of Detroit, Plymouth, but it is moving right in the heart of downtown Detroit, a move, chairman and CEO R. Bruce McDonald says is being done, in part, because the city is in a huge revitalization phase such that younger, creative people are gravitating there, and Adient wants to be part of it), October 31 is Halloween.

But arguably, there is absolutely nothing scary about launching a new company in automotive seating (the company produces some 25,000,000 seats and components per year, or about a third of all automotive seats) right now (especially when it has such extensive capabilities to ideate and execute around the globe) because while up to this point automotive exteriors have always been the primary focus, as there is a greater move toward automated and autonomous driving, it’s what’s inside that will matter most.

Tom Gould had been with JCI for nearly 30 years before segueing into Adient, where he’s now the director, Industrial Design, Research & Craftsman-ship. And when we ask him about how things are, he states, “There’s an energy I haven’t felt in a while.” Part of the energy, of course, is predicated on the changes that are occurring in what is still a nascent company in many ways.

But the other energy gets to the point of the changes that are related to the social and technical changes that are increasing the importance of interiors, which is picked up by Richard Chung, who, following his graduation from Art Center in 1987, has had positions at Ford, JCI, Yangfeng Automotive Interiors (a joint venture between Yangfeng Automotive Trim Systems and Adient), and Adient, where he is the vice president, Innovation and Design. (While he’s based in Germany, it is probably more accurate to say that he’s based in a plane, as we catch him in Plymouth, between trips to Asia and Europe.)

Chung ticks off a number of global trends that they’re monitoring, from vehicular automation to electrification (he notes that the German Bundestag voted to ban new vehicles with internal combustion engines in 2030, and adds, “China has a tendency to follow European policies,” and amplifies that by pointing out that a couple days before we talk the airport in Chengdu, “a new automotive capital in China,” was shut down because the smog impeded visibility). There is a growing shared economy, and the convergence of things like the Internet of Things, Big Data and 3D printing.

“The consumer,” Chung says, “is shifting from ownership to membership. From product to experience. From manual work to automation. From human decision making to artificial intelligence.

“There will be a huge shift in our society regarding how people will consume their time, energy, money, and so forth.”

And he thinks that the changes are coming quick.

Which puts Adient in a place where there are huge challenges and probably bigger opportunities.

Chung observes, “The seat itself is kind of a dumb product—metal, foam and plastic.”

With the changes that are aborning, there need to be smarter seats—seats that may monitor a person’s heath (why, you may wonder: well, should there be an autonomous vehicle and the person that Gould describes as “the designated driver” is incapable of taking control of the vehicle due to a health problem, then the autonomous system really ought to be aware of that). There need to be seats that move around the interior of a vehicle (Chung: “If you’re traveling 85 percent of the time by yourself and you’re in an autonomous vehicle, would you place yourself in the front left or somewhere in the middle?”)

But there are even changes that have nothing to do with robotic driving.

For example, the growing change toward 48-volt architectures in cars. “Our motors and power supplies are going to have to be compatible,” Chung says.

Car sharing means people are going to be getting in and out of cars frequently. “This means that they’re going to be cleaned more frequently or we may have to switch them out,” Gould says. They’re looking at zipper trim covers, as well as antimicrobial materials.

Still, anticipating Level 3 and Level 4 autonomous systems coming in cars—with the first being Conditional Automation, meaning that a human may have to be called in to pilot the vehicle, and High Automation, wherein the vehicle is self-driving, but within constrained conditions—Adient has developed a concept named “AI17.”

For example, there is a rotational base platform for the seats which serves two functions. For one, the base rotates up to 70 degrees allowing easier ingress and egress for people. The base then allows each of a pair of seats to rotate toward the centerline of the vehicle by up to 15 degrees to facilitate conversation.

The front seats are designed to pivot further than is the norm today and the various associated elements, such as the headrest and the armrests, more in coordination. The rear seats offer up to 45 degrees of recline and feature integrated leg rests that stow under the seat cushions for improved packaging. And the rear seats are readily removed and stowed in a thin stadium position to increase the storage space within the vehicle.

The point is, whether the vehicle is autonomous or not, there still need to be seats for the people to sit in, so that’s not going to change. However, the seating possibilities begin to take on more characteristics of living room furniture than traditional car seats.

And while on the subject of things non-traditional, Gould and Chang say that they’re spending more and more time in California and other points west, talking to the people who are starting up new car companies. While there are existing expectations of what an automotive seat is—let’s face it, when just one company is producing in excess of 25-million of one type of thing annually, there’s a fairly shared understanding of what the norm is—and while there are federal regulations regarding how a seat has to perform—they’re finding that start-up car companies have entirely different expectations in terms of development and execution of seats, they are more receptive to many of the ideas that are generally confined to the “concept” category. “We have to be more disruptive in our seats to meet their expectations,” Chung says.

Fortunately, given the combination of things that it inherited from its JCI past like capacity and know-how and the enthusiasm and imagination that comes from a fresh start, Adient is well positioned to address the needs of its customers, be they companies that have been around for 100 years or not even five.