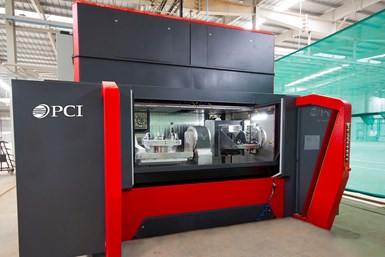 Independent twin spindles in PCI horizontals permit separate part production on each or working together on long, structural aluminum parts such as battery trays.

France-based PCI (Process Conception Ingenierie; pci.fr, a company of Taiwan-based Tongtai Group and available in the U.S. through Absolute Machine Tools; absolutemachine.com) is an industry witness to this transition. Originally a company of the Peugeot group in the late 1930s and a subsidiary of Citroen in the 1950s, PCI has engineered and supplied transfer lines and turnkey production lines throughout its lifelong relationship with automobile manufacturing.

The spindles on PCI horizontals can be manipulated separately without entirely reprogramming the machine.

Flexibility and productivity are making themselves felt in many ways in machine-tool design. Consider independent twin-spindle machining. PCI’s TS900V Meteor horizontal machining center features twin independent four- or five-axis spindles that can be engineered to machine a wide range of sizeable aluminum and cast-iron parts. Distance between the dual spindles is adjustable for part-production flexibility, and spindle independence means the machine can simultaneously process identical parts or separate components for subsequent assembly, such as gearbox housings and clutch housings. This promotes production flexibility while saving precious floorspace.

“There are other twin spindle horizontals out there,” according to Steve Ortner, president of Absolute Machine Tools. “But basically, there is a fixed distance between the spindles, and they have to make the same part.” That’s one of the main reasons why many shops avoid twin-spindle machining centers. Setting up two parts is challenging because it has to be extremely accurate.

The e-spindle integrates sensors and actuators to monitor cutting processes and adjust parameters to optimize tool life and workpiece quality.

The spindles on PCI horizontals can be manipulated separately without entirely reprogramming the machine. Unlike conventional twin-spindle machining centers, machinists don’t have to locate the work and the tools precisely relative to one another. In fact, it’s possible to mill two different parts. For example, a part could be milled in a vertical orientation on the first spindle, and on the second spindle, a completely different part could be milled at an angle. A robot or overhead gantry could transfer the part from one spindle to the other, allowing machine shops to do op. 10 and then op. 20, to produce a complete part in one machine cycle.

Part-size capacity is 1,275 mm in length and 800 mm rotation diameter. With four- or five-axis configurations and spindle options of HSK100 (up to 12,000 rpm) and HSK63 (18,000 rpm), the TS900V’s twin spindles can address simultaneous machining of large structural parts such as battery trays integrated into the frame structures of electric vehicles or symmetrical parts such as right and left knuckles.

A major differentiator of new machine tool designs compared to traditional models is the number of sensors for sensing, measuring, and feeding back forces, dimensional changes, and other data to the CNC. At EMO in September 2019, PCI introduced what it calls the “e-spindle,” a new electro-spindle that integrates sensors and actuators to monitor cutting processes and adjust parameters to optimize tool life and workpiece quality.

Developed in collaboration with the Technical Centre for Mechanical Industry (CETIM) and the Aix-en-Provence campus of the French Arts et Métiers engineering and research graduate school, PCI presented three e-spindle applications that showcased smart machining technology. One demonstration highlighted real-time monitoring of cutting process variables including force, vibration, and coolant pressure. An adaptive drilling application illustrated the benefits of ongoing vibration control. And a honing toolholder operation featured integrated measurement of workpiece diameter to permit continual control of the honing process on part changes and tool life. Up to six different channels and 11 single-ended sensors can be integrated into an e-spindle for configuring many different part and machine conditions to monitor and adjust.

Fight to the Finish