“After Hours” in New York

Last week the New York International Auto Show held its press and industry preview days, which essentially means that the Javits Center was full of people who buy few cars (journalists), people who want to sell lots of cars (dealers) and a wide array of professionals who make up the global auto industry.
#oem #Hyundai #Cadillac

Last week the New York International Auto Show held its press and industry preview days, which essentially means that the Javits Center was full of people who buy few cars (journalists), people who want to sell lots of cars (dealers) and a wide array of professionals who make up the global auto industry.

So because “Autoline’s” John McElroy and I happened to be attending the show, and because we were accompanied by “Autoline’s” top-notch production staff, we did an “Autoline After Hours” the likes of which we’ve never done before, and one that includes insights—especially about design—the likes of which you’re likely to get nowhere else. For example, there’s David Woodhouse, Lincoln Design director, explaining what they did in executing the all-new Corsair compact crossover, the fourth addition to the lineup of SUVs that Lincoln has launched in the past few years. The face of the latest Cadillac: the CT5

Cadillac introduced the all-new CT5, a sedan that will replace both the ATS and the CTS in the company’s lineup and therefore is an exceedingly important product for the brand. We get Brian Smith, Cadillac Exterior Design director, to tell us all about the execution of that car. 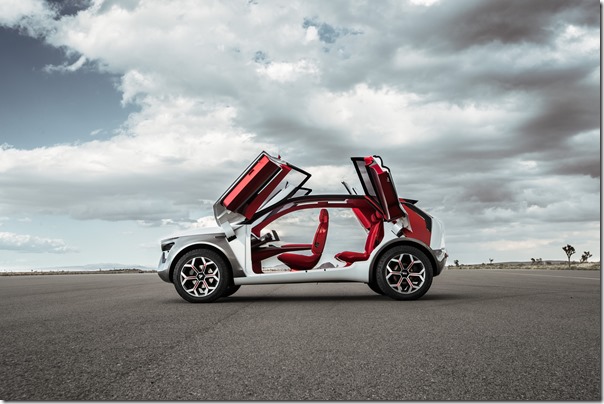 Spicy, electric and autonomous (if you want—the steering wheel retracts into the IP)

Kia came to New York with a concept, the HabaNiro, which Kurt Kahl, Kia senior design manager, gives us a view, inside and out, of this crossover that is electric, autonomous and happens to have more of an off-road approach than the production Kia Niro, a hybrid. Arguably, the HabaNiro ups the game both in terms of powertrain and ruggedness (to say nothing of, Kahl notes, Level 5 autonomous capability—but it is, remember, a concept). Fitzgerald and the Mint

And there is a lot more. Like Manfred Fitzgerald, executive vice president and Global Head of the Genesis Brand, talking about the Mint concept, an all-electric city car that seats two and is intended to have a range of up to 200 miles (given the traffic outside the Javits on 11th Avenue, a compact, luxury EV makes tremendous sense). Fitzgerald says they’re going to push for production. Sonata gets back to stylishness

We talk to Michael Evanoff, manager, Product Planning, of Hyundai Motor America about the 2020 Sonata—they’re bringing the serious styling back to the midsize sedan—and the entry-level Venue crossover.

We look at the new Toyota Highlander, the Porsche 911 Speedster, the new Subaru Outback, and even a Honda HR-V that has, as you can see here, seen better days (crashed by the IIHS, it received a “Good” rating): And you can see the show right here, without having to sit in a non-moving cab in midtown Manhattan.