The Alfa Romeo 4C Spider has a carbon fiber monocoque and an aluminum chassis, which contribute to a 10.4 power-to-weight ratio, meaning that its all-aluminum, 237-hp direct injected turbocharged engine doesn't’t have a heck of a lot of mass to move (curb weight: 2,487 pounds), so there is a 0 to 60 mph time of 4.1 seconds, which is rather attention grabbing should you be one of the two occupants, as the overall length of the car is just 157 inches, or about the distance traveled for an average-sized person taking five steps. Yes, it is a small rocket.

In 2018 FCA delivered 238 Alfa 4C models to customers in the U.S. That number was down 42 percent compared to the 407 delivered in 2017. When you consider that the company delivered more than ten times the number of Jeep Cherokees in 2018, 239,437 (which as up 41 percent from the year earlier), that there were rumors that the 4C might not be available in the U.S. market isn’t entirely surprising. 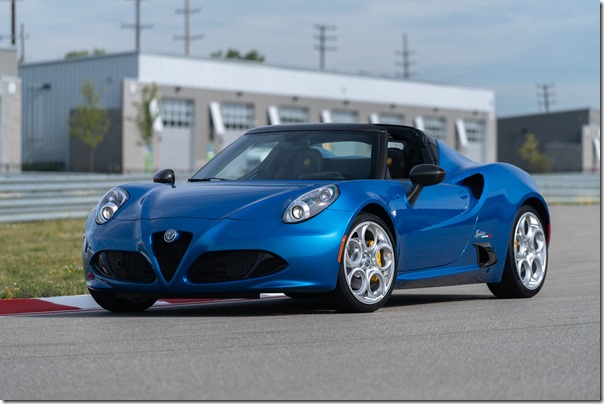 But at the Chicago Auto Show yesterday it was announced that there is the 2020 4C Spider Italia that is being made available in the U.S. which has a special color (Misano Blue Metallic) and some other graphic differences.

Here’s the thing, though: there are going to be 15 available.

Odds are that by the time you read this they’re gone. (Though you could try reserving one at sales@alfaromeo.com )

You can bet that this group of cars will be absolutely handcrafted with care.

However, it should be pointed out that there will be a production run (well, such as it is) of non-Italia 4Cs produced for the 2020 model year, so even though those blue ones might be gone, there is still the opportunity to get others.

(And seriously: Shouldn’t all Alfas be red?)