David Johnson, president and CEO of Achates Power, knows that opposed-piston (OP) engines aren’t exactly new things. Fairbanks Morse, a company which Achates has been working with, developed one back in the 1930s. There was the Commer TS3 in the 1950s. And others between the ‘30s and now.

So why did the Department of Energy (DOE) provide Achates Power with a $9-million award to develop an OP engine? Why did the California Air Resource Board (CARB) announce last week that it was awarding Achates with a $7-million grant to develop a Class 8 truck engine?

Well, in the case of the DOE ARPA-E award, it led to the development of a gasoline compression ignition engine, a 2.7-liter, three-cylinder engine, that provides 270-hp, 480 lb-ft of torque and returns 37 mpg combined when dropped into an F-150. According to Achates, the engine has about 60 percent fewer parts than a comparable supercharged V6, which can result in a 10 percent cost reduction. What’s more, the engine can be deployed within an existing vehicle without major modifications to the vehicle. And, Johnson says, the Achates OP engine can be made with the “same basic manufacturing equipment” and using the same supply base that is used to produce conventional ICE engines. 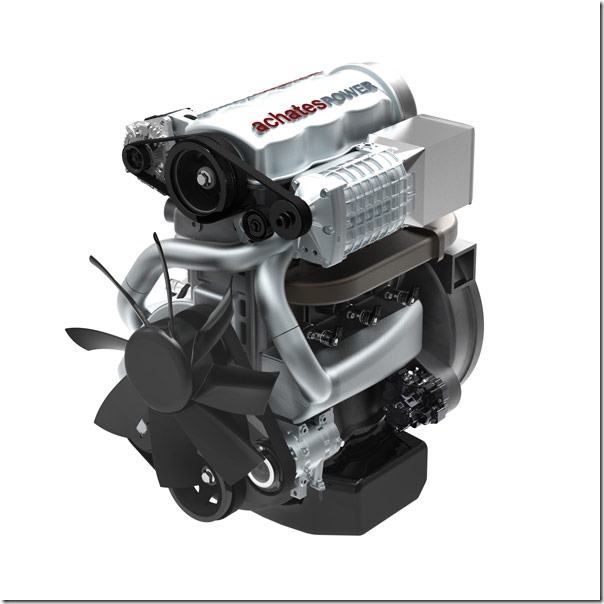 In the case of the CARB project, they’re looking to have a pair of demonstration trucks by 2020 that run on diesel and meet the NOx emissions standard of 0.02 grams per brake horsepower-hour as well as emitting 10 percent less CO2 than the current 2027 federal greenhouse gas requirement.

So why does Johnson think that Achates will be able to accomplish the development of production engines that are transformative in performance without requiring the same level of changes that are required in order to create, say, electric vehicles or even plug-in hybrids.

The answer is simple: Achates is working with 21st century technology and with outfits like Delphi Technology and the Argonne National Laboratory. They have the computational capabilities and the developed technologies that can be deployed to address the shortcomings (e.g., emissions, noise) that have plagued other OP engines.

Johnson talks about what Achates has accomplished and what it is working on with Autoline’s John McElroy, Frank Marcus of Motor Trend, and me on this edition of “Autoline After Hours.”

In addition to which, McElroy, Marcus and I discuss a number of other topics, including some of the vehicles introduced at the Geneva Motor Show, the Edmunds 2018 Loyalty Report (SUV owners are now the most loyal to the vehicle type, squeaking past the truck owners and leaving the car owners way, way behind), Uber Health and a whole lot more.

Which you can see here.