Bob Galyen has had an extensive career related to batteries, as in batteries for electric vehicles. During his tenure (21 years) at General Motors, he was involved in the development of the GM Impact, an EV concept that GM introduced at the LA Auto Show in January 1990. The vehicle was developed with AeroVironment.

The Impact, over the next few years, transitioned into one of the most famous EVs of all time: The GM EV1. 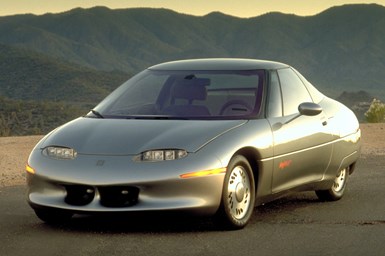 And that last is worth a bit of note: it is Contemporary Amperex Technology Limited. It is a China-based company that is claimed to be the largest battery manufacturer in the world.

Galyen retired from CATL in November 2019. He had been the chief technology officer. Galyen worked there seven years.

Galyen explains in this edition of “Autoline After Hours” that he went to CATL, in part, because he was convinced that the proliferation of electric vehicles was going to occur first and foremost in China. What’s more, he learned of the Chinese government’s commitment to EVs in order to help minimize air pollution that can lead to death from respiratory illnesses.

Gaylen provides insights into all aspects of EV battery technology, ranging from the chemistries of the various types as well as the reasons behind various configurations (e.g., pouch, cylindrical, prismatic).

He talks about why the $100 per kW/hour number (which is, if your not familiar with it, the point at which batteries are to be able to contribute to a powertrain that is cost-competitive with an internal combustion engine) is not as definitive as you might think: he refers to it as a “rubber ruler.”

Galyen discusses the good work that is being done by NAATbatt International to drive batteries forward. He drops the names of more scientists and engineers who are involved in the battery universe, an array of people whose work has gotten the EV industry to where it is right now—and to where it is going.

He explains why having a giant battery plant under one roof is not a good thing (in the case of fire a big facility can mean that workers are going to be challenged when it comes to trying to get out).

He also explains why getting new battery technology on the road is not something that is likely to happen quickly: He points out that from the time lithium-ion batteries were being experimented with on the bench in labs to the time they were adopted for automotive use 42 years had passed.

Gaylen talks to “Autoline’s” John McElroy, Anton Wahlman of Seeking Alpha and me.

This is admittedly a bit technical at times, but it is worthwhile to get a better understanding of the tech from someone who is thoroughly steeped in it.

And you can see it all on "Autoline After Hours".