An OG of SUVs: the 2020 Toyota Land Cruiser Heritage Edition

The Toyota Land Cruiser has been rolling on—and off—streets in America for more than 50 years. And the Heritage Edition is a nice tribute.
#HP #Toyota #Magna

While some might think that when Toyota made its way into the U.S. market more than half-a-century ago it did so with vehicles about the size of something you would find in the toy department of a Walmart today. But were you to wind back the clock you’d discover that one of the early offerings was the 1957 Land Cruiser, a bona fide sport utility vehicle before that term was even being used. In those days of yore, it was “4 x 4.” And for something like the Land Cruiser, it still is. This isn’t a poseur, but a steel-clad performance machine, when performance means being capable of dealing with the sorts of things that you might have studied in an earth sciences class. 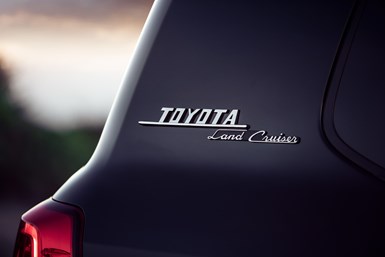 This looking backward to look to today is predicated on the 2020 Land Cruiser Heritage Edition. When I first saw the logo—shown in the nearby photo—for the vehicle, I couldn’t help but smile, as this speaks to an earlier day when things were more physical and less digital, when there was a sense of tangible authenticity to the product.

This is not to say, of course, that the 2020 vehicle is without the contemporary amenities ranging from satellite radio to Siri Eye Free mode, from a nine-inch touchscreen for infotainment to a suite of safety systems that are wrapped up in standard Toyota Safety Sense P (e.g., lane departure alert, automatic high beams, pre-collision braking).

It has all of that and more.

But for those who are seriously interested in the ability to chew rocks, there is the high-strength body-on-frame structure that’s below the shiny sheet metal (Heritage colors, incidentally, are Midnight Black Metallic and Blizzard Pearl) and the double wishbone front and four-link coil spring rear suspensions. Of course, odds are that any driver of the Land Cruiser is going to be on paved roads more often than those that haven’t ever seen the scraper on a piece of construction equipment so there is what Toyota calls the “Kinetic Dynamic Suspension System,” which hydraulically adjusts the stabilizer bars, depending on the conditions. That is, if there is notable articulation required because one side of the vehicle is on an igneous outcropping and the other isn’t, the KDSS accommodates. (And should those chunks of solidified magna happen to hit the underbody, there are skid plates that protect things like the fuel tank (you’re going to want that protected, especially if you’re in between somewhere and nowhere) and the radiator.) 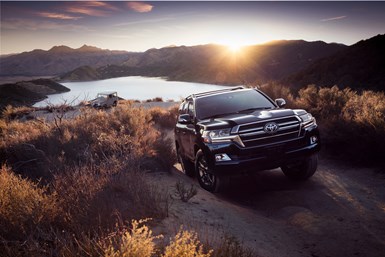 And on the subject of keeping the wheels rotating, there is a full-time 4WD system that features a Torsen limited-slip locking center diff and a two-speed transfer case with low range.

What’s making those wheels turn is a 5.7-liter V8 that produces 381 hp and 401 lb-ft of torque. It is mated to an eight-speed automatic.

However, capable though this vehicle is, the Heritage Edition is somewhat lux such that it might be a bit difficult to want to take it to places yet-to-be-paved.

For example, there are bronze-colored BBS 18 x 8-inch forged aluminum wheels: Do you think you’d want to scratch them?

There are running boards (the ground clearance is 8.9 inches, so those are beyond handy for ingress and egress): Do you think you’d want to rip them off? Do you want to risk scratching those bronze BBS wheels?

And there is an array of cosmetic adds, like darkened headlight housings and darkened chrome details on the sideview mirrors. (Dark is the new lux.)

On the inside, the third row has been removed for the Heritage Edition, which means there is (1) seating for five and (2) capacious cargo capacity. About the latter: there are 53.5 cubic feet available for stuff. And if that’s not enough, the Land Cruiser offers an 8,100-pound towing capacity.

And to roll back to the history of the vehicle, know that the Land Cruiser name first appeared on a vehicle built in Japan in 1954. Clearly, a lot of experience there.