This is a picture of a diecasting setup taken on the inside of a new €35-million, 5,000 square-meter factory extension of a factory in Neckarsulm, Germany, a facility of KS HUAYU AluTech GmbH, a company that is a 50:50 joint venture of Rheinmetall Automotive KG of Germany and HUAYU Automotive Systems, a member of China’s SAIC Group. It is a setup for producing battery trays for electric vehicles. 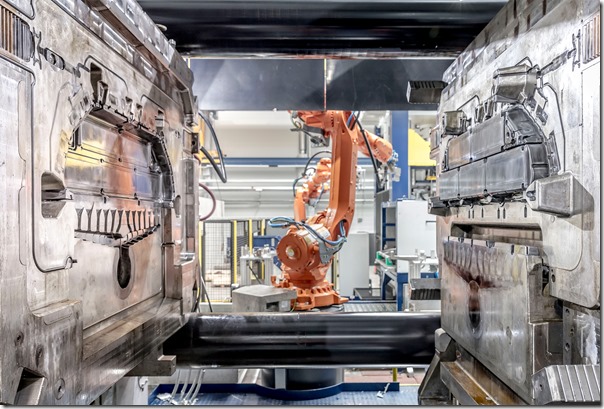 What’s interesting to note about this is that the joint venture, which was established in 2014, had initial concentration on producing such things as engine blocks. But with time the company started making things like battery trays and housings for electric motors, as well as non structural components, such as mountings for shock absorbers (which are powertrain type neutral).

But it seems that the company is finding that there is increased potential in the EV area, so they built the expansion, which provides the ability to go from diecasting and heat treating to CNC finish machining and final inspection.

As Horst Binnig, CEO of Rheinmetall Automotive AG, put it: "For us, the new production shop at Neckarsulm emphasizes the move toward new production techniques and technologies making us further fit to cope with the challenges ahead in the wake of tomorrow's mobility."

And odds are tomorrow’s mobility is somewhat different than today’s.

(Incidentally, KS HUAYU AluTech GmbH has two additional plants in Germany and six in China. But it is worth noting that it produces five million cylinder heads per year in China, so maybe the ICE isn’t going to suddenly disappear from the world’s streets.)