"By 2025, we want to boost annual sales of electric vehicles to one million units,” says Herbert Diess, Chairman of the Board of Management, Volkswagen Brand. He adds, speaking of a concept vehicle that VW introduced at Auto Shanghai 2017 this week: “The I.D. CROZZ will play a key role in that. Production will begin in 2020." The I.D. CROZZ is a compact crossover that seats four. It has a top speed of 112 mph and a range of up to 310 miles (based on NEDC, the New European Driving Cycle).

It is based on the company’s Modular Electrification Toolkit (MEB), which has the lithium-ion battery pack integrated into the floor and the drives and suspension located toward the corners of the vehicle for maximum interior space.

Although Diess is talking 2020, at this point it is still a concept.

So in light of it not being fully realized, here are some sketches of the I.D. CROZZ (which follows the I.D. unveiled in Paris and the I.D. BUZZ in Detroit) from Volkswagen exterior designer Tibor Juhasz: 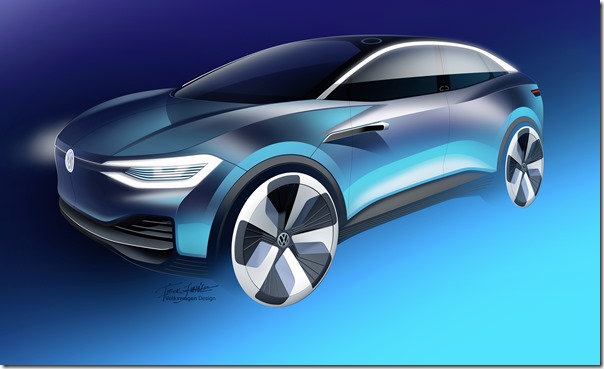