At next week’s CES in Las Vegas—the preeminent electronics show—there will be games and drones and virtual reality and digital health products and entertainment devices and. . .autonomous vehicles. Although the North American International Auto Show will be taking place in Detroit the following week, given the number of announcements and press conferences being held by OEMs known and unknown (Toyota, Byton) as well as an array of traditional (ZF, Continental) and not-so-familiar suppliers (TriLumina (VCSEL laser tech for 3D sensing and LiDAR), Foresight Automotive (3D multi-camera based vision system)), it almost seems as though CES is as vehicle-intensive as NAIAS will be (but let’s face it, there’s all that other stuff in Vegas, too—and I mean what’s being shown at the convention center, not elsewhere).

One of the challenges that all of these companies face when it comes to autonomous technology is that consumers haven’t had much in the way of experience with self-driving vehicles (outside of something on rails at Disney World).

Last year AAA conducted a study of U.S. consumers’ feelings about autonomous vehicles and discovered that 78 percent of Americans were afraid to be in a self-driving vehicle. That’s right: scared.

Looked at from an age breakdown: 85 percent of Boomers are afraid, 73 percent of Millennials and 75 percent of Gen Xers.

So what companies need to do if they want acceptance is to get people in autonomous vehicles so that this isn’t perceived as something that is eerily unknown.

To that end, Aptiv is going to be providing CES attendees with an autonomous riding experience, partnering with Lyft in this effort. 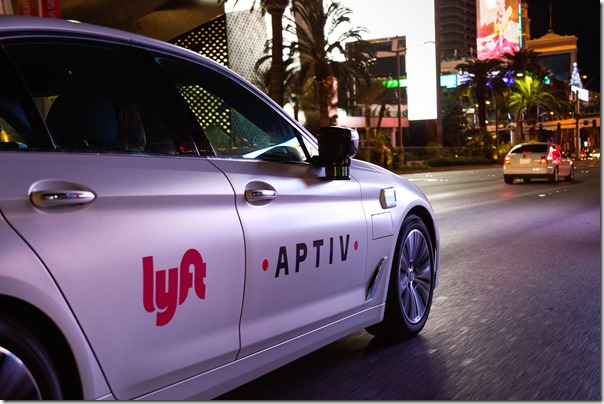 Called the Aptiv-Lyft 2018 Automated Experience, passengers will be able to book a vehicle from the Las Vegas Convention Center’s Gold Lot, and then be transported to more than 20 locations throughout Las Vegas.

There will be a safety driver in the front seat in the event that things don’t go as planned.

There will also be an “in-car host,” who will probably continue on with the theme that the rider has experienced having gone through “an informative exhibit designed to showcase the positive impact automated cars will have on individual lives and communities” before getting in the car.

(Sounds a little like the “free” vacation one gets for experiencing a time-share presentation.)

It is worth noting that Aptiv and Lyft have more than a small amount of experience vis-à-vis autonomous driving. Aptiv has developed an autonomous driving platform that can be integrated into vehicles and Lyft announced last year that it is partnering with companies—including Aptiv—to develop the capability for its ride-hailing service.

What’s more, nuTonomy, a company that develops self-driving car software, which was acquired by Aptiv last October, had announced in June 2017 a strategic partnership and automated driving pilot program in Boston with Lyft.

Here’s something for those who would be scared to consider about climbing into a self-driving car (at least one with a person ready to take over controls should something go wonky): would any company put consumers in cars if the technology being deployed wasn’t robust and reliable, particularly in the context of our litigious society?