Although Don Tocco, founder and president of D.L. Tocco & Associates, has extensive development experience in automotive manufacturing plants across the U.S., that is not why he’s on this edition of “Autoline After Hours.”

Rather, it is because he is an artist. A sculptor, in particular.

And Tocco’s busts have a bias toward executives in the auto industry, people whom Tocco has come to know, primarily through his philanthropic activities. 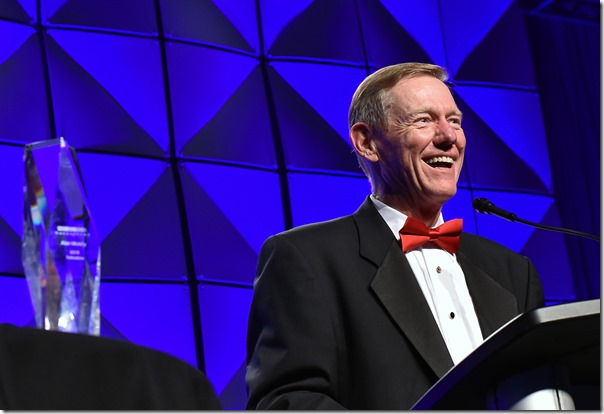 Mulally being inducted in the Automotive Hall of Fame. Don Tocco says that sculpting teeth are difficult, but given Mulally’s infectious grin, he is working hard on making sure he can capture it in the bust he’s working on. (Photo: Sam VarnHagen)

Tocco talks to Autoline’s John McElroy, Henry Payne, the Detroit News auto critic and editorial cartoonist (yes, Henry is an artist, too) and me about how he first got to know J. Edward Lundy, one of the 10 “Whiz Kids” who helped Ford Motor develop post-World War II. Lundy became the chief financial officer of Ford in 1967, a position he held until his retirement in 1979. The bronze bust of Lundy that Tocco created is on display at the Automotive Hall of Fame.

Yes, Tocco knows present Ford CEO Mark Fields, but he doesn’t say whether there is another bust in the works. In addition, John, Henry and I discuss a variety of subjects, ranging from whether Waymo’s use of Chrysler Pacifica minivans may result in the resurgence of minivans, a vehicular category that seems to be on the wane, to flying cars (McElroy points out that they’re really not cars as much as they are simply drones) to whether General Motors needs to create a Corvette crossover/SUV to compete with the likes of the Porsche Cayenne and Maserati Levante.

And there is a whole lot more.

Which you can see here: