The Porsche 918 Spyder was a clean-sheet development program at Porsche, one that aimed at developing a vehicle with racing capability combined with hybrid fuel frugality.
#Carbon #Porsche #HP 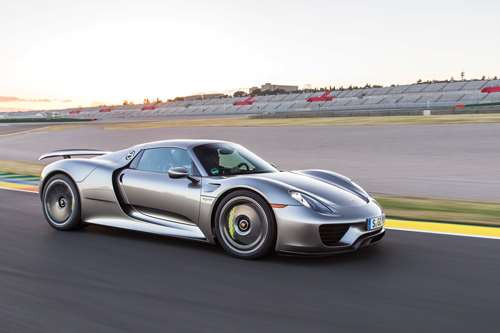 This is not your ordinary hybrid vehicle. It’s the Porsche 918 Spyder. 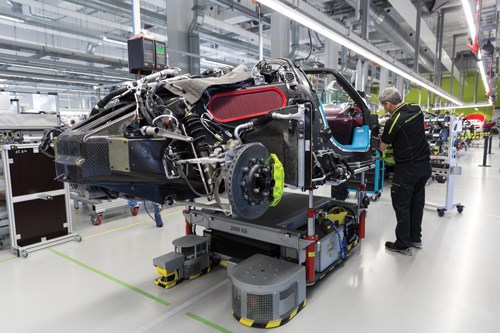 Note the hybrid module in the rear of the vehicle—that section covered by carbon fiber. 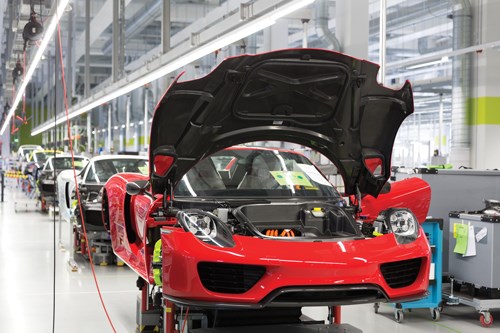 Inside the facility at Stuttgart-Zuffenhausen, where the 918 is built. 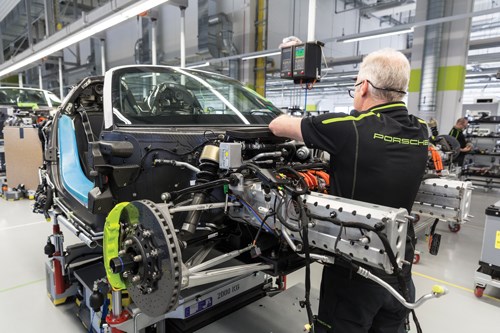 Working on the front axle of the 918.

The Porsche 918 Spyder was a clean-sheet development program at Porsche, one that aimed at developing a vehicle with racing capability combined with hybrid fuel frugality.

There are three sources for propulsion for the vehicle, with the primary one being a 608-hp 4.6-liter V8.  This is the most-powerful naturally aspirated engine (132 hp/liter) produced by Porsche.  One of the goals in developing the engine, which drives the rear wheels—along with or independently from an electric motor—was to create a lightweight package, in keeping with the reduced-mass approach.  So they did things like integrating the oil tank and air filter box into the subframe, using carbon-fiber reinforced polymer for the air induction system, and producing
the connecting rods with titanium.

The setup on the rear axle is to have a 115-kW electric motor and a decoupler.  The architecture is parallel hybrid, so depending on the throttle demands, the engine and/or motor is deployed.

The 918 Spyder is an all-wheel drive vehicle.  This is a 95-kW electric motor on the front axle, which operates independently from the hybrid module on the rear. (The electric motors area powered by a lithium-ion battery pack that consists of 312 liquid-cooled cells.  It is rated at 6.8-kWh.)

Not surprisingly, the vehicle has a carbon-fiber structure.  The vehicle, unladened, can weigh as little as 3,595 lb.  (The weight distribution is 57% rear, given that V8 and motor, and 43% front.)

However, when you have a clever car, you need a clever manufacturing process, and that’s exactly what Porsche created at a facility in Stuttgart-Zuffenhausen for the production of the 918 Spyder.

As Michael Drolshagen, director of Production, who was involved in designing the production operation, put it, “Our definition of innovation goes well beyond the vehicle itself.”

One of the areas of emphasis in developing the process was on ergonomics.  So, for example, they’re using scissors lift platforms that move from station-to-station as the car is built up, in effect, from the inside out.  The lifts facilitate the handling of a 140-kg battery pack, as well as assume that the body shell is maneuvered without any in-process damage.

There is an elevating truck that allows the monocoque to be rotated, lifted, tilted, and lowered as required.  This allows the interior, 12-volt battery (after all, there needs to be a battery that handles the loads of things like lighting and gauges, too), and high-voltage wiring to be positioned as needed during the process.

One interesting aspect of the assembly is that this is the first-ever use of Bluetooth-controlled cordless screwdrivers at Porsche.  The Bluetooth connection is with a database that has all of the torque values for the screws.