The transformation is underway at Volkswagen to become a preeminent producer of electric vehicles. And it is happening in a big way in Zwickau, Germany.
#Volkswagen #Carbon

<p>The MEB architecture is much simpler than that for a vehicle powered by an internal combustion engine.</p> 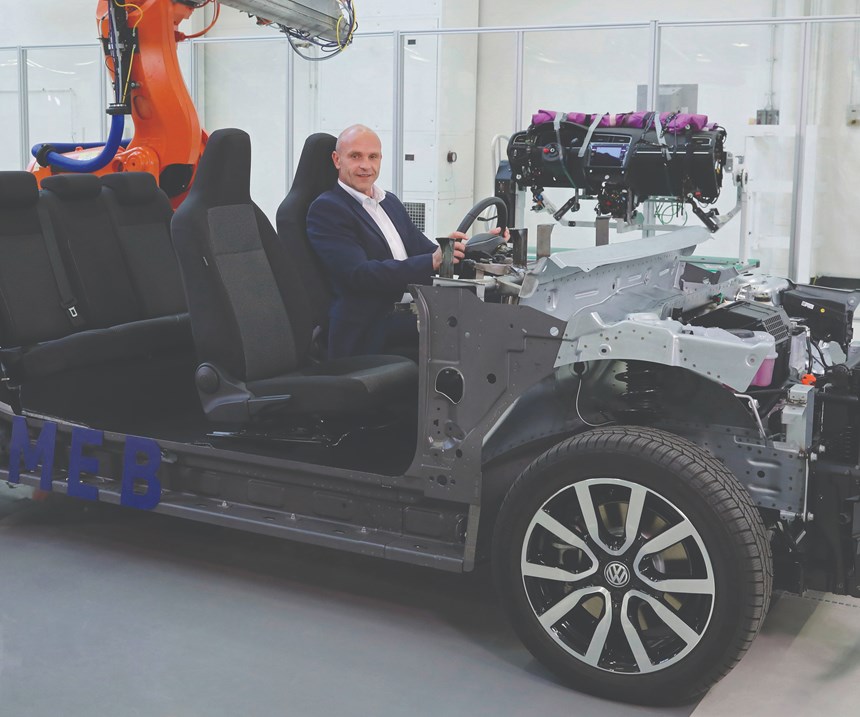 <p>&ldquo;We want to take e-mobility out of its niche and to make the electric car affordable for millions of people. Large volumes and efficient production will lay the foundation. This is why we are bundling electric car production at Zwickau and making the plant the nucleus of our major electric offensive.&rdquo;-- Thomas Ulbrich, Member of the Volkswagen Brand Board of Management responsible for E-Mobility</p>

<p>&ldquo;We want to take e-mobility out of its niche and to make the electric car affordable for millions of people. Large volumes and efficient production will lay the foundation. This is why we are bundling electric car production at Zwickau and making the plant the nucleus of our major electric offensive.&rdquo;-- Thomas Ulbrich, Member of the Volkswagen Brand Board of Management responsible for E-Mobility</p>

When the transformation at the Volkswagen Zwickau assembly plant is complete, it will be, according to Thomas Ulbrich, Volkswagen brand Board Member responsible for e-mobility, the “number-one e-site.” Meaning that it will become the company’s highest production electric vehicle plant in Europe. And that means they’re going to be assembling a lot of vehicles: the annual capacity when fully operational, which is expected in 2021, will be 330,000 vehicles, or looked at another way, 1,500 vehicles per day. While not an old plant by any means, will arguably become one of the company’s most future-oriented. The Zwickau plant, located in Saxony, in the eastern part of Germany (about 85 km due south of Leipzig), first went into production in 1990. Since then, the facility, which has an overall footprint of 1,400,000-square meters, has produced more than 5.5-million vehicles. Most recently, the production lineup includes the Volkswagen Golf and Golf Variant. There are presently some 7,700 people building Golfs at the facility, producing some 290,000 vehicles per year.

The transformation at Zwickau isn’t one where the company is closing up shop and reconfiguring the plant to accommodate the ID. model (as well as other vehicles: the plan has it that there will be six electric models manufactured there, not only for the VW brand, but for two other Volkswagen Group brands). Rather, they have been working on transforming one section of the plant—upgrading and modernizing the body shop, paint shop and assembly infrastructure—so that it will start building vehicles by the end of 2019. The same sequence will then occur for a second production line, which is expected to start operation in 2020 and be fully operational in 2021.

It is worth noting that they will continue to build Golfs in the plant until mid-2020. After all, the demand for the Golf is something that is known and well established; what the ID. market acceptance will be like remains to be determined.

But when the second section of the plant done, the facility will be transformed from one doing 100 percent internal combustion engine-powered vehicles to 100 percent battery electric.

The electric vehicles are based on a newly developed platform, MEB, or Modularer Elektrobaukasten, which is specifically engineered to accommodate batteries and electric motors; it is not a design that is predicated on an internal combustion powertrain and adapted for electrification. Consequently, the manner of production that will be performed at Zwikau for the ID. is different than that which is performed for the Golf. For example, the cockpit is designed as a module that can be robotically installed in the ID.

Being a plant where an important vehicle like the Golf is being produced, the Zwickau factory has considerable automation, particularly in body and paint. But as this is a plant where the future of Volkswagen is arguably going to begin, and as Industry 4.0 is huge in Germany, the plant will be fully digital and connected, information will be networked and analyzed.

In addition to which (or as part of the 4.0 activities), there will be the installation of Industry 4.0-compliant robots in the plant. There is also a number of cobots going in for human-robot cooperation (there are approximately 7,700 employees in the plant). There will be some 1,700 robots when the plant is completely redone. In addition, for parts transport to the line they are planning to deploy approximately 500 automated guided vehicles in Zwickau, which will travel through the facility on pre-determined paths.

It is estimated that the amount of automation in vehicle assembly at Zwickau will be tripled from what it has been.

That said, they are training the employees to prepare them for the production of the electric vehicles. Of the 7,700, for example, approximately 1,500 are being specifically trained to work with high-voltage systems. In all, it is calculated that there will be 13,000 training days conducted for the Zwickau team.

Another aspect of the assembly of the electric vehicles is that it will be done in a way that is carbon-neutral. The plant has been operating on hydropower since 2017. VW has asked its suppliers to also use power from renewable sources. When the ID. goes into production there will be a cogeneration plant operating at the site. In instances where they are unable to avoid emissions, Volkswagen will compensate for them, as in protecting areas of the rain forests.

It makes little sense to produce a zero-emissions vehicle if the production results in more emissions.

Zwickau is just the start. In November 2018, Gunnar Kilian, VW Human Resources Board Member, said, “We are moving at full speed into the production of electric vehicles. Emden and Hanover are to be further model plants in Germany. Together with Zwickau, they will form the largest network for the production of electric vehicles in Europe.” The assembly plants in those two German cities will begin assembly of electric vehicles in 2022. Emden will become a dedicated MEB plant. Hanover will not only build the ID. Buzz (the microbus-styled electric vehicle) and its variants, but also continue to produce light commercial vehicles with internal combustion engines. As Chairman of the Brand Board of Management of Volkswagen Commercial Vehicles, Dr. Thomas Sedran, put it, “This way we are safeguarding the future of the Hanover plant and employment. All in all, we are making Volkswagen Commercial vehicles fit for the transformation of our industry.”

And part of this transformation will have an effect on employment. As Kilian pointed out when the announcement for Emden and Hanover was made, there would be an employment guarantee up to 2028, as the transformation took place at both sites: “This offers security for the employees during the transformation. However, fewer production steps are involved in making an electric vehicle; we will need fewer employees in the final resort. We have therefore agreed with the Works Councils that the current employment volume will be adapted in a socially compatible way along the demographic curve via the attractive partial early retirement scheme of Volkswagen.”

Which is to say that going forward, there are going to be more issues faced by auto assembly facilities that start producing electric vehicles than the hardware on the floor.

While final assembly of the ID. model is going to take place at the VW Zwickau plant, there are five other Volkswagen plants in Germany are instrumental in the development of the vehicle. The model is being conceived and developed by the E-Mobility Series Group and Technical Development in Wolfsburg. The battery system will be produced in a plant in Brunswick, which is undergoing an expansion to achieve a future production capacity of up to half a million battery systems per year. The MEB powertrain will be produced in Kassel. Salzgitter plant will be the source of the MEB rotor and stator.