“Flying taxis are on the way.” Which sounds like a statement that one might hear from some futurist who is standing on a podium wearing a jumpsuit that appears as though it was sourced from Starfleet Command. But the quote continues: “We at Audi are convinced of that.” And the person who said those words in relation to what is called “Pop.Up Next,” a combination of a self-driving electric car and a passenger drone, an undertaking that includes Audi, Airbus and Italdesign, was Dr. Bernd Martens, Audi board member for sourcing and IT, and president of Italdesign (an Audi subsidiary). 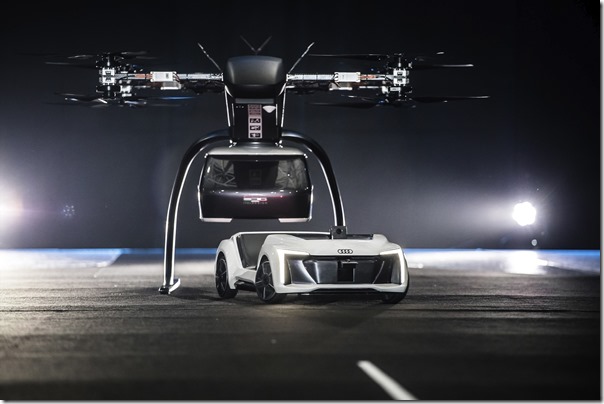 Martens’ rationale: “More and more people are moving to cities. And more and more people will be mobile thanks to automation. In [the] future, senior citizens, children and people without a driver’s license will want to use convenient robot taxis. If we succeed in making a smart allocation of traffic between roads and airspace, people and cities can benefit in equal measure.”

The companies have developed a 1:4 scale model of Pop.Up Next. In a demonstration at Week in Amsterdam, the flight module deposited a “passenger capsule” on a ground module (a.k.a., car), which then drove way autonomously.

Determining the usefulness of something of this type in the full-size world, Audi is working with Voom, an Airbus subsidiary, in South America on a program that involves people booking trips on a helicopter and are picked up in an Audi upon arrival . Explained Martens: “Services like this help us to understand our customers’ needs better.”

Martens added: “The next step is for a full-size prototype to fly and drive.”