Remember the childhood game of telephone, where players whisper a phrase to each other and pass it along down a single file line? The more people involved, the more jumbled the message becomes at the end.

A similar phenomenon can happen in new cars equipped with a growing number of sensors and processors, all of which are trying to talk to each other. Only in this case, miscommunication and data loss don’t translate into a funny ending.

High-end vehicles can have well over 100 microprocessors. This not only adds costs and encroaches on diminishing interior space with miles of associated wiring, it also can reduce the effectiveness of some devices or, worse, create conflicting messages, which is especially disconcerting with safety-critical systems.

As a result, companies are shifting toward a handful of domain controllers to reduce costs, enhance integration and enable greater packaging flexibility. There’s even talk about the potential for an all-powerful master controller that could manage virtually all in-vehicle systems.

We’re not there yet. But Audi is taking a step in that direction with a new ECU that is designed to control all powertrain and chassis systems. 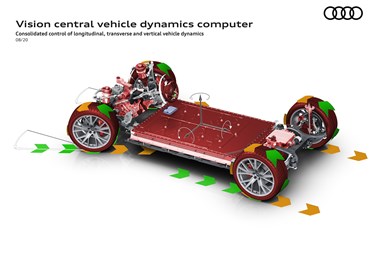 Dubbed the Integrated Vehicle Dynamics (IVD) controller, the new system builds on Audi’s existing Electronics Chassis Platform (ECP) that was introduced in the 2015 Q7 SUV. Audi plans to eventually use the combined system in all future models—including conventionally powered cars, hybrids and full-electric vehicles—with the first applications due to launch in the “near future.”

IVD will be about 10 times more powerful than the ECP computer. The new system can coordinate and manage the operations of as many as 90 sensors and other devices, according to the carmaker. This compares with 20 for ECP.

In addition to being more powerful and faster, IVD also is expected to provide greater coordination between powertrain and chassis/suspension functions. This could result in several performance benefits, such as: 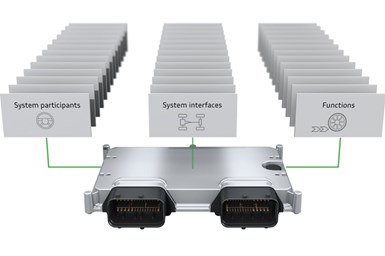 Audi’s IVD is 10 times faster than the current ECP computer and controls as many as 90 sensors.

The integrated processor will handle longitudinal, lateral and vertical dynamics control as well as energy and powertrain management, Audi notes.

As an example, the carmaker says damper compression rates can be synched with regenerative braking within milliseconds to boost efficiency and keep a vehicle more precisely on track. Active suspension performance also could be optimized to enable vehicles to take corners at higher speeds or provide greater comfort on uneven road surfaces.

In the AQ7/SQ7 SUVs, ECP already links Audi’s electromechanical active roll stabilization, predictive active suspension and all-wheel-steering systems to reduce body roll during hard cornering. This is achieved by lifting the far vehicle side against the centrifugal forces with a moment of up to 885 lb-ft.

In the Audi A8 supercar, the active suspension can lift the body by 3 inches to help minimize the impact of a side collision. The deformation of the passenger compartment can be cut in half as a result, according to the carmaker.

Synching powertrain and chassis systems can provide greater differentiation between comfort and sport settings—as well as boost efficiency. The latter is being done with the e-tron crossover’s integrated brake control system, which can boost the electric vehicle’s driving range by 30% through improved regenerative braking.

IVD also promises to enhance next-generation technologies such as vehicle-to-vehicle communications. In this case, following vehicles could react faster and more precisely based on information shared from lead vehicles about upcoming road conditions.

The same applies to advanced driver assist and autonomous vehicle systems, such as lane-keeping assist and all-wheel steering. At the same time, Audi says the performance of a multi-link suspension and other mechatronic components can be enhanced.

“This is about creating smart networks of diverse components and functions,” explains Klaus Diepold, who is responsible for network architectures in Audi’s Chassis Development.

He notes that Audi introduced its quattro all-wheel-drive system 40 years ago. ECP and IVD evolved from that technology and are the next steps toward fully integrated vehicle controls.

Now that’s something worth talking about.