Audi, which arguably revolutionized automotive lighting in 2004, when it brought out the A8 L W12 with LED daytime running lights, will be undoubtedly have other OEMs chasing it again as it is supplementing the LED headlights* on an exclusive edition of the R8 with laser high-beam modules.

That’s right. The 2017 Audi R8 V10 plus exclusive edition, of which 25 will be built, cars that have a starting MSRP of $229,200, are being equipped with high beams based on laser diodes. 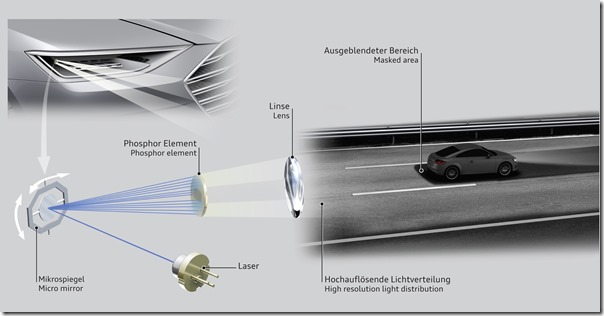 Each lamp has four high-intensity laser diodes from OSRAM that are bundled into a beam with a 450-nanometer wavelength. The resultant blue beam is then sent to a micro-optical system from Bosch with electro-mechanical control that transforms the blue color into white light with a phosphor converter. That is then used to supplement the LED high beam when the vehicle is at speeds of 40 mph and above.

The laser lights have been available in Europe since 2014. They will be introduced by Audi on the new R8 at the 2017 LA Auto Show.

*Each headlamp makes use of 37 LEDs.