NVIDIA, the tech company that transformed powerful, compact computing with its graphical processing units (GPUs) that lead to systems-on-a-chip (SOC)*, and Audi, the car company that transformed what was the state of the art of automotive interiors (and which has been using NVIDIA tech in its vehicles for navigation displays, for example, which enhances the look of the interiors of its cars and crossovers), jointly announced last night at a keynote at CES 2017 that they’re going to be working together to advance artificial applications to address autonomous driving capabilities.

Scott Keogh, Audi of America president, stated, “In our mutual pursuit for safer roads, the partnership between Audi and NVIDIA will expand to deep learning and artificial intelligence to bring higher automation into production more quickly.” 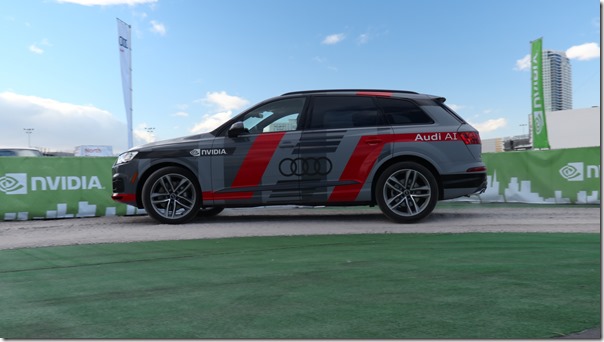 This Q7 concept uses neural networks and end-to-end deep learning on NVIDIA's artificial intelligence platform. The vehicle learns from both the road and the driver in every mile it travels. Thanks to the deep learning capabilities, when something unexpected occurs, the system is capable of adapting to the conditions as required.

And from their side of things, Jen-Hsun Huang founder and CEO of NVIDIA, said, “Audi’s adoption of our DRIVE computing platform will accelerate the introduction of next-generation automated vehicles, moving us closer to a future of greater driving safety and new mobility services.”

DRIVE PX 2 is a computing platform that can be scaled as required to perform tasks starting from a system for performing automated highway driving by using HD maps and sensors to locate the vehicle to systems that combine two SoCs and two discrete GPUs to multiple systems that provide extensive vehicular awareness and capabilities.

While the companies said they’d be putting highly advanced AI cars on the road by 2020, this year Audi is launching the A8 with Traffic Jam Pilot, which the company says will make it the first vehicle to meet SAE Level 3 automation. The system uses an NVIDIA-based system that will allow the driver to conditionally turn over steering, throttle and braking functionality to the vehicle at speeds of up to 35 mph—think of this as a way to deal with traffic jams on the freeway.

Between now and 2020 Audi is expanding its test fleet of AI-equipped vehicles in the U.S.

*NVIDIA is also the recipient of the AD&P and AutoBeat first-ever Automobility award in the Technology category.