Autonomous Driving Where It Is Really Wintery

Last week, the American Center for Mobility—a test facility for automated driving located on 500 acres in Ypsilanti Twsp., Michigan, that includes a 2.5-mile highway loop, a 700-foot curved tunnel, two double overpasses, intersections and roundabouts—opened, with Visteon Corp. being the first company to conduct testing. One of the reasons why the ACM is useful for the development of autonomous vehicle technology is because as Visteon engineers experienced during their tests of their DriveCore platform, it snows in Michigan. After all, not all autonomous driving is going to occur in places like Silicon Valley or greater Phoenix.

However, also last week there was a test of autonomous capabilities going on across the Atlantic on the stretch of road known as “Aurora E8,” which runs through portions of both Norway and Finland. There a Volkswagen Touareg operated by the VTT Technical Research Centre of Finland nicknamed “Martti”—a vehicle instrumented with cameras, sensors, laser scanners, antennas, and processors—traveled along the E8 at what is said to be a record speed: 40 km/h (~25 mph).

Notably, the road was snow-covered, there were no lane markings and it was snowing.

Good Design Awards for 2020 in Auto
The Software Revolution Is Here It’s a great time to be a software engineer in the auto industry.

And according to Matti Kutila, project manager of the VTT RobotCar Crew*, “It could have had even more speed, but in test driving it is programmed not to exceed the limit of 40 km/h.”

As autofieldblog headquarters are but 20 miles away from the American Center for Mobility, we must admit to having more than a bit of local pride in the new facility.

That said, there is one thing that has to be given up to the Aurora E8.

Yes, we have snow in these parts, but the Aurora E8 is north of the Arctic Circle.

*The crew has developed another vehicle that they call “Marilyn,” which is instrumented differently than Martti (Martti’s three laser scanners look forward; Marilyn has one looking behind the vehicle and two ahead). VTT uses data accumulated by both to enhance the performance of the other. 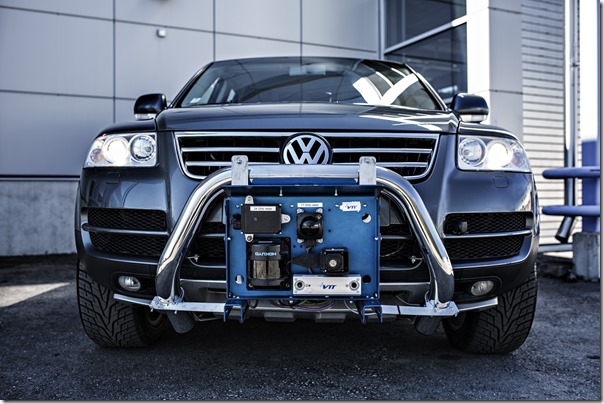