Autonomous Vehicle for the Factory

Although this may not seem like much, it is actually an advanced, sensor-equipped, artificial intelligence running. . . autonomous vehicle (AV): However, this development, the MiR1000 is designed for use in factories, not on limited-access highways.

Although this may not seem like much, it is actually an advanced, sensor-equipped, artificial intelligence running. . . autonomous vehicle (AV): 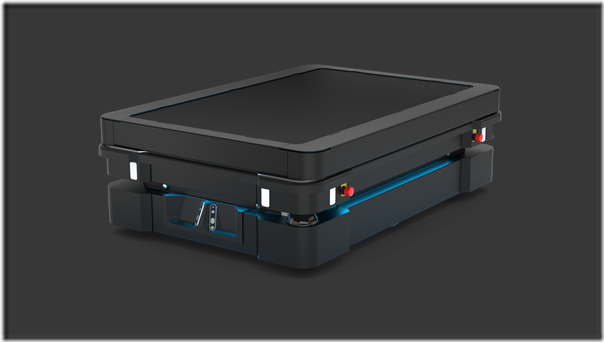 However, this development, the MiR1000 is designed for use in factories, not on limited-access highways. But the principle of the two types of AVs is essentially the same. The driverless vehicle knows where it needs to get to, then makes use of its sensors (cameras, 360° SICK laser scanners) and on-board intelligence to determine what it must do in order to accomplish that.

However, whereas an automotive AV is likely to transport people (although they’re also rolling along with things like pizzas on board), the MiR1000 is more likely to have a pallet and a load, one that is on the order of 2,200 pounds (or 1,000 kg, which is where the numeric designation in the name comes from).

The device—as well as models the company has previously introduced (the 100, 200 and 500—all with the same kilogram-based digits) is capable of optimizing route planning and anticipating and adjusting for any “traffic jams” on the factory floor. Visti: “With the MiR 1000 and our other highly flexible autonomous robots, none of which require rebuilding infrastructure or extensive programming capabilities, we have made it especially easy to optimize the transportation of all types of materials.”

One interesting aspect of this “autonomous mobile robot” (AMR). That blue band isn’t simply a design element but is actually a indicator of the action of the robot: blue indicates that it is being manually driven by a joystick. There are other colors that are shown, including red (emergency stop), white (planning/calculating) and a rainbow (charging).

Just think: at some point AMRs are going to be used in the production of road-going autonomous vehicles.