“Autopilot” or Not: YOU Drive the Vehicle

The National Transportation Safety Board has released a preliminary report on a fatal traffic accident that occurred on March 1 involving a Tesla Model 3 with Autopilot active and the trailer of a tractor-trailer. According to the NTSB, the Tesla was traveling at about 68 mph when it hit the trailer: “The roof of the Tesla was sheared off as the vehicle underrode the semitrailer and continued south.”

The driver was killed.

Preliminary data collected from the vehicle “show that the Tesla Autopilot system—an advanced driver assistance system (ADAS) that provides both longitudinal and lateral control over the vehicle motion—was active at the time of the crash.” But not active for long: “The driver engaged the Autopilot about 10 seconds before the collision.” 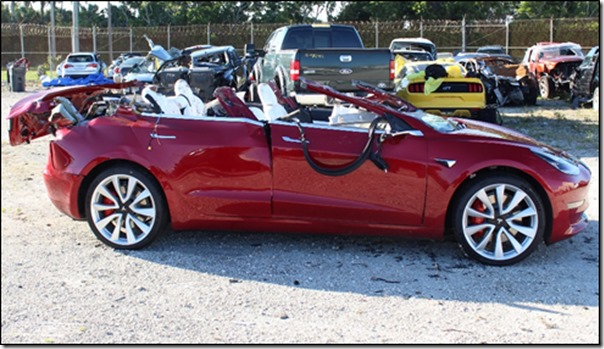 Here’s something that has to be taken into account: the NTSB notes, “From less than 8 seconds before the crash to the time of the impact, the vehicle did not detect the driver’s hands on the steering wheel.”

The use of the name “Autopilot” has long been criticized, and not just by the cadre of Elon haters.

Presumably, there are those who image that the name means that it is a set-and-forget: the car will do all the work.

There are at least two things that ought to be red flags indicating that that is certainly not the case.

As the NTSB wrote, Autopilot is “an advanced driver assistance system.” It assists the driver. Which means that the driver is still in the loop, not otherwise occupied.

And perhaps more importantly, on the Tesla website, where Autopilot is described, it clearly states, “Autopilot is intended for use with a fully attentive driver, who has their hands on the wheel and is prepared to take over at any time. While Autopilot is designed to become more capable over time, in its current form, it is not a self-driving system.”

That is worth repeating: “Autopilot is intended for use with a fully attentive driver, who has their hands on the wheel and is prepared to take over at any time. While Autopilot is designed to become more capable over time, in its current form, it is not a self-driving system.”

Is there something ambiguous about that?

But while there are some “self-driving” vehicles on roads right now transporting people, all of them have a person sitting behind the steering wheel, ready to take over should something go awry.

While this horrible accident will cause continued criticism of Musk, no one should lose sight of the fact that idiotic marketing names notwithstanding, when you are behind the wheel of a motor vehicle, you are responsible for controlling it.