Drivers have been talking to cars for a number of years now. Push a button on the steering wheel and annunciate.

Then phone calls get made or music played.

Nuance, which has long offered voice-based systems for vehicles, has now expanded the capabilities of its Dragon Drive artificial intelligence (AI) platform so that even passengers can get involved, no pushbutton needed. 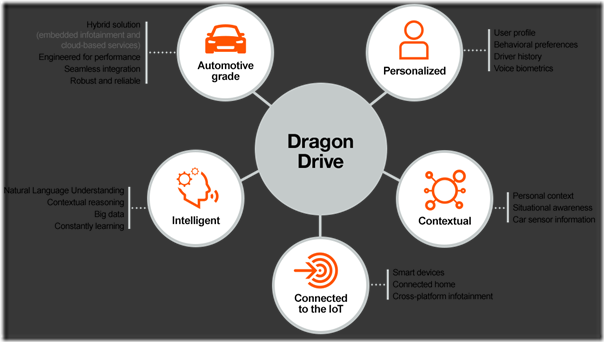 The system uses a variety of technologies—including signal enhancement, voice-biometrics, hybrid embedded-cloud speech recognition, natural language understanding, and text-to-speech—so that anyone in the car can make a request for, say, music.

Which, of course, could result in agitation even more profound than that caused by back-seat driving.

Nuance is also expanding the capability of the system to connect the car to the home (and vice versa).

Explains Arnd Weil, senior vice president and general manager, Nuance Automotive, “Giving automakers the ability to integrate a central, customized automotive assistant is essential for two reasons. First, today’s connected cars have so many rich content apps and services that everyone should have seamless access to as part of the in-car experience. Second, an intelligent automotive assistant is critical for the driver’s trust in a (semi-) autonomous vehicle – and that trust will be essential for the adoption of autonomous driving.”

Through the AI capability that the system has it is anticipated that it may be able to not only listen and respond to vehicle occupant requests, but anticipate and engage with them.

Perhaps it might be able to settle the argument about what station to listen to.