A few weeks ago, a self-driving semi carrying 50,000 cans of Budweiser traveled 100 miles, from a weight station in Fort Collins, Colorado, to a depot in Colorado Springs. The 18-wheeler (a Volvo) was engineered with tech from Otto, a company owned by Uber. It uses two cameras for lane detection, LIDAR, two front-facing radar sensors, and GPS. 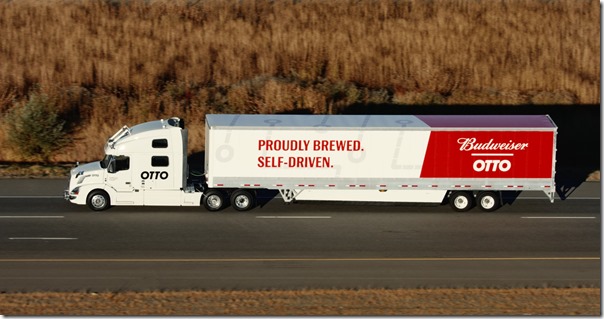 There must be something about tech companies and big rigs.

According to AWS, “Each Snowmobile comes with up to 100PB of storage capacity housed in a 45-foot long High Cube shipping container that measures 8 foot wide, 9.6 foot tall and has a curb weight of approximately 68,000 pounds. The ruggedized shipping container is tamper-resistant, water-resistant, temperature controlled, and GPS-tracked.”

The Snowmobile is driven to the site where you have massive amounts of data to be stored, hook it up to the trailer, and “in as quickly as a few weeks,” the data is stored on board, ready to go somewhere to be securely stored.

AWS says that data migration of this scale had previously required years.

But what if you don’t have 10PB of data or more?

Then there’s Snowball, designed for a more modest amount of data.