Bentley Mulliner, which is the Bentley Motors operation that provides bespoke execution for the clients of the company’s motor vehicles, has announced that it is offering tweed trim for the company’s vehicles, the Flying Spur, Continental GT and Bentayga. 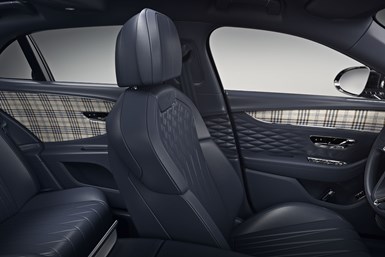 Doesn’t it seem as though that would have been something that the company would have had on offer since 1919, when W.O. Bentley launched the EXP 1?

There are four tweed patterns on offer, including the Cheltenham (countryside greens, the traditional touch), Glen Plaid-Tolsta Beach (no, not some exotic tropical beach, but a plane on the Outer Hebrides), Charcoal, and Sand Herringbone.

The materials are being sourced by Lovat Mill, a Scottish firm that Bentley says produces its tweeds “in the most ethical and environmentally friendly ways.”

Specifically: the firm operates what is known as a “dry” production operation, with no hazardous chemicals like AZO dye used on site; the weaving is done on “environmentally aware” rapier looms (which is a shuttle-less loom that uses fingers-like elements to carry the filling yarn through the shed of warp yarns—no, we don’t know that that means, either); 90% of the electricity in the town of Hawick, where the mill is located, is generated from renewable sources.

What’s more, most of the Lovat Mill workforce walks to work, thereby not having a carbon impact.

No, not “hood” in the American sense of the word (the Brits call it a “bonnet”), but the convertible top material. The material for the top of this Bentley Continental Convertible: tweed.

Speaking of what they did, Cathy Bass, Bentley Colour and Trim designer, said, “We wanted to create something that hadn’t been done before and we had never seen a Tweed effect hood. We felt confident that tailoring and heritage fabrics would become a significant trend with longevity, and we decided that was the right direction to pursue.”

While the top doesn’t have a pattern like, say, Glen Plaid-Tolsta Beach, there is an effect that the dark beige color seen at a distance (it is actually a combination of dark brown and cream yarns) changes so that the woven strands become evident when getting closer to the top.