The Crewe, U.K.-based firm has positions for 51 young people. They will join more than 200 others who are already part of the apprenticeship program.

Among the categories of training are Digital, Sales and Marketing, Human Resources, Finance, Purchasing, Engineering, and Manufacturing. 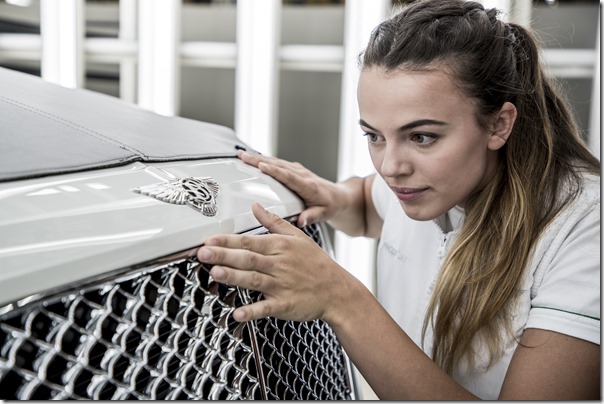 Not surprisingly, there is an emphasis on the first-named. As Dr. Astrid Fontaine, Member of the Board for People, Digitalisation and IT at Bentley Motors, said, “In the rapidly changing world of automotive, mobility and services, we are proud to deepen the existing digital experiences that already exist as part of the programme, by launching pure digital apprenticeship positions.

“It is vital as we transform our business that we look to the next generation of experts and cultivate an agile mind-set, focused on creative solutions and innovations. This will support the future-proof of the Bentley business and engage the luxury customer of tomorrow.”

In the digital space the company is emphasizing two things, both its Bentley Network app, which is a Bentley members-only system where there are communications capabilities and information, and its Advanced Connectivity system, which it describes as “the world’s first super-fast, reliable and secure in-car WiFi system” offering “near 5G speeds.”

There will be 15 apprentices assigned to the digital realm.

Notably, 25 successful candidates will pursue manufacturing. After all, at the end of the day, Bentley is a vehicle manufacturer.

While they will learn about things including mechatronics and paint, there is another category that indicates the special nature of building a Bentley. Another are of focus is: Wood.