While we are probably not at the edge of the Apocalypse, the joint announcement coming from BMW Group and Daimler AG today is something that most people probably didn’t expect and might have seemed Apocalyptic not all that long ago.
#BMW #Daimler #Ford

Ray Stantz: Fire and brimstone coming down from the skies! Rivers and seas boiling!

Winston Zeddemore: The dead rising from the grave!

While we are probably not at the edge of the Apocalypse, the joint announcement coming from BMW Group and Daimler AG today is something that most people probably didn’t expect and might have seemed Apocalyptic not all that long ago.

For one thing, the two competitors announced that they have a joint venture, one with each company owning half. 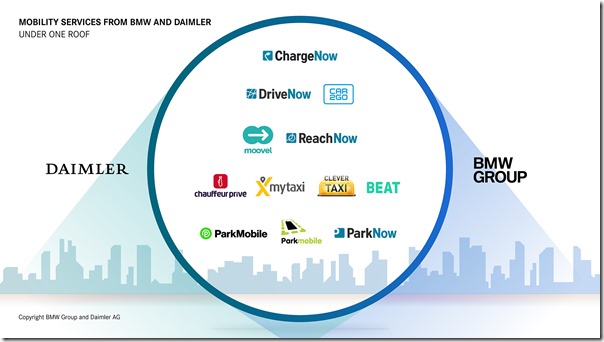 For another, this is a company that isn’t about the design, development and sales of motor vehicles or components, but arguably something that could actually reduce the number of vehicles that the companies produce.

As it is described: “customers will move through a seamless connected and sustainable ecosystem that combines CarSharing, Ride-Hailing, Parking, Charging and Multimodality from a single source. . . . The idea is to create the most attractive, most comprehensive mobility solution for a better life in our connected world.”

Both companies have been operating their own services in this mobility space, but the yet-to-be-named new company, which has gotten approval by anti-trust authorities in various locales, including the U.S., will integrate the offerings of the partners.

--Multimodal and on-demand mobility (the firms moovel and ReachNow): everything from bike rental to booking a taxi to getting a car as a service

--CarSharing (Car2Go and DriveNow): combined, there are 20,000 vehicles in 30 cities serving more than four million customers. The companies acknowledge, “Carsharing enables better utilization of vehicles and thus helps reduce the total number of vehicles in cities.”

--Ride-Hailing (mytaxi, Chauffeur Privé, Clever Taxi, and Beat): The first three are based in Europe and the last in South America. In all, 15.9-million customers and approximately 250,000 drivers.

The word remarkable seems to understate the case. To be sure, OEMs collaborate—think of GM and Ford on transmissions—but when there is integration of what is a burgeoning area like this, one that major OEMs are working to secure their place in, it is something entirely different.