A look at the 7 Series Carbon Core.
#HP #Audi #Schuler 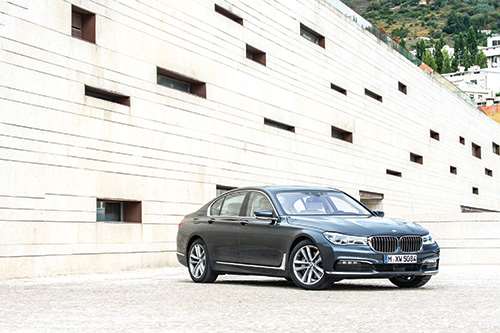 The sixth-generation BMW 7 Series is not merely a study in stateliness, but in materials science, as well.

How often does a vehicle have a badge that indicates one of the materials that it is constructed with? The 7 Series does. That’s “carbon” as in carbon-fiber-reinforced plastic.

Tooling for CFRP in the BMW Dingolfing plant, where the 7 Series is produced.

The body-in-white of the 7 Series is not just one type of material. Rather, it is a combination of metals and plastic. The B-pillar, for example, is a sandwich consisting of high-strength steels with a CFRP middle.

Without question, the BMW 7 Series, the sixth-generation of the company’s luxury sedan, is a milestone in the use of carbon-fiber-reinforced plastic (CFRP). One could make the argument that either the BMW electric i3 or the hybrid i8 are as significant as regards the use of CFRP, but given the fact that both of those cars are niche players—the former because it is an electric vehicle, and at this point in time electric cars are an acquired taste and the latter because as breathtaking as the design may be, it is a hybrid that has a starting MSRP of $140,700, so it’s not like you’re going to see too many of them outside of places like Silicon Valley (in 2015, even though sales of the i8 increased by 308 percent, sales in the U.S. were a total of 2,265 according to Autodata—and the 7 Series is the flagship that goes up against the likes of the Mercedes S Class and the Audi A8, clearly the 7 Series has more overall relevance. And let’s face it: the 7 Series is bigger (200.7 inches long, 74.9 inches wide, and 58.1 inches high vs. 157.8 inches, 69.9 inches, and 62.1 inches for the i3 and 184.9 inches, 76.5 inches, and 50.8 inches for the i8; the 7 Series has a curb weight of 4,225 pounds and the i3 and i8 are 2,860 and 3,455 pounds, respectively), though it is more of a mixed-material execution than either of the i-vehicles.

According to BMW, the sixth-generation 7 Series is 286.6-pounds lighter than the previous generation sedan despite the new car having a whole lot more in the way of mass-adding comfort and safety features. This weight-save is largely attributed to what they call the “Carbon Core.”

The Carbon Core certainly has a significant amount of CFRP, but it is used in conjunction with ultra-high strength steels and aluminum. The 7 Series construction is by no means like a Formula One car, where there is a composite monocoque. It’s not that they couldn’t do it, but even in the market segment where the starting price for the sedan is $81,300, a total CFRP tub would be cost-prohibitive.

So what they’re doing is using CFRP extensively yet tactically. There are 15 components that are used to take advantage of the strength of the materials. For example, there is a CFRP roof frame, which not only increases the torsional stiffness of the vehicle, but helps lower the center of gravity of the car. This means that the component enhances both safety for the passenger cell as well as improved driving dynamics (after all, this may be something of a stately sedan, but it is still an “Ultimate Driving Machine”).

Other CFRP components include the door sills, transmission tunnel, the rear package shelf and the C- and B-pillar.

The B-pillar is a particularly interesting component as it consists of a sandwich of hot-stamped steel with a CFRP inner. This hybrid construction allows weight savings without any sacrifice in the area of safety.

While the i-vehicles have CFRP outers, the 7 Series is aluminum-intensive. Which is not necessarily surprising when you know that at the BMW Dingolfing plant, where the 7 Series has been produced since gen-one in 1977, the aluminum body shells for Rolls-Royce models are built. In the case of the 7 Series, the hood, doors and decklid are aluminum (as are suspension components—and although the i3 and the i8 are produced at a plant in Leipzig, the aluminum chassis setups for both of the cars are built in Dingolfing).

Because of the mixed-material nature of the 7 Series, the assembly processes in Dingolfing (which happens to be the largest BMW plant), to produce the car there is a mixed approach as well, combining structural adhesives, laser welding, spot welding, rivets and other fasteners.

While Dingolfing has expertise in aluminum manufacturing techniques, it has also gained extensive competence in producing CFRP components. For example, they use a “hybrid pressing” process to produce the B-pillars. Resin-impregnated carbon fiber sheets (prepregs) are placed in a mold along with the steel blanks. The press cycles and pressure and heat are applied to create the component. They’re also doing a wet pressing process to produce parts. Again, prepregs are pressed in a three-dimensional die and hardened. Although the cycle time to produce these parts is molasses-like compared to sheet metal stamping operations, the Dingolfing operation has the ability to produce “several thousand” CFRP components per day.

It should be noted that BMW has made more than a minor investment in the production technologies that are being deployed in Dingolfing for the production of the 7 Series. According to Oliver Zipse, member of the Board of Management of BMW AG, responsible for Production, during the 3 years prior to the launch of the car in 2015, the company had invested “more than a half a billion Euros in new efficient production technologies” for the car.

In 2012, Germany-based consultancy Roland Berger (rolandberger.com) produced a study titled “Series production of high-strength composites: Perspectives for the German engineering industry.” In it, the authors write that they anticipate that the key industries that will drive the growth of high-strength fiber-reinforced composites will be automotive and aerospace. Interestingly, BMW, established in 1916, was originally an aircraft engine manufacturing company; it didn’t start building cars until 1928.

Presumably someone at BMW read that report because the company has invested $200-million U.S. in a joint venture, SGL Automotive Carbon Fibers based in Moses Lake, Washington, which happens to be the source of the carbon fibers for the 7 Series (and i-vehicles) that are turned into carbon fiber fabrics by SGL in a BMW facility, Wackersdorf Innovation Park, in Germany.*

The Roland Berger researchers write, “Those engineering companies that consciously enter the ‘composite production’ segment and adopt a clear strategic positioning will dominate the market in the medium to long term and will make the most of the expected market growth.”

Yes, clearly the people in Munich read the report.

* Other companies are involved in providing materials, as well, such as Hexcel Corp. (hexcel.com), which produces preforms for the B-pillar component that uses the company’s HexPly M77 resin system for the prepregs that are supplied to BMW. The resin cures in 1.5 minutes at 160°C. Hexcel has established an operation in Neumarkt, Austria, to produce the B-pillar preforms.

In the United Kingdom they’re so bullish on composites that in 2011, as an element of the U.K. Composites Strategy (who knew that a country would have a “composites strategy”?), the National Composites Centre (NCC; nccuk.com) was opened in Bristol. There are more than 30 companies participating in the NCC, which has floor space measuring 8,500-m2 (91,493-ft2).

A recent addition to the equipment on the floor of the NCC is a mixing and metering machine, the RimStar Compact 4/4/4 from KraussMaffei (kraussmaffei.com), which is used to process both epoxy resin and polyurethane for high-pressure resin transfer molding (HP-RTM).

Although the Schuler Group (schulergroup.com) might be ordinarily associated with forming equipment for, well, steel and other metals, executives at the company obviously know that there are changes aborning, so it is heading up a new group project sponsored by the German Federal Ministry of Education and Research called “iComposite 4.0.”

The objective of the project is to make it possible for cost-effective volume production of components made with fiber-reinforced plastics, thereby allowing greater utilization of the materials throughout the auto industry.

Among the activities are reducing production-related scrap through the use of near-net shaped materials. Also by reducing the amount of materials in a given operation, time savings can be achieved, as well. They are working on combining resin-injection molding with additive manufacturing, as in having fibers precisely sprayed to achieve the optimal load profiles in the finished part.