A bona-fide story of necessity being the mother of invention.
#tech #Bosch

Not much has changed in the world of sun visors since they first started appearing in the early 1930s. Drivers flip them down to block the sun’s glare—which is said to cause twice as many accidents as any other weather-related factor—then back up when they aren’t needed. It’s a simple and relatively effective solution to a common problem.

But it isn’t optimal. Visors aren’t left down all the time because they can obstruct a driver’s vision. And constantly adjusting them is annoying at the very least and, worse, may distract a driver’s attention away from the road ahead. 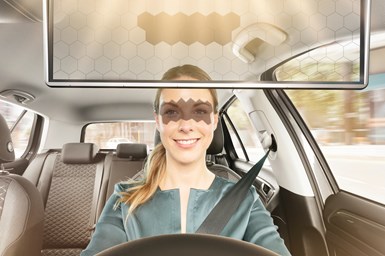 Now an idea conceived by three Bosch (bosch.com) powertrain engineers (we’ll get back to that) in 2016 promises to be a glaring improvement. The technology, which teams a flip-down LCD panel with a driver monitoring camera and artificial intelligence, selectively darkens small areas of the so-called “Virtual Visor” as needed to shade a driver’s eyes. The transparent portion of the visor improves visibility by as much as 90% and eliminates the need to flip the visor up or make adjustments once it’s deployed, according to Bosch.

Like most commuters, Bosch’s Ryan Todd learned to make do with the shortcomings of current sun visors—and was frustrated by them. But as an engineer for the world’s largest supplier, he was in a position to do something about it.

The initial idea came to Todd as he battled the sun on one particularly bright summer morning on the way to his suburban Detroit office. After sharing the concept with colleagues at a weekly innovation meeting, Todd and two other Bosch powertrain engineers—Jason Zink and Andy Woodrich—began to flesh out the details.

You’d be correct in assuming that these guys typically have absolutely nothing to do with a car’s cockpit, at least on a professional basis. But under Bosch’s five-year-old innovation framework program, employees are encouraged to apply lean startup methods to the development process. Even when a technology is totally unrelated to their full-time job.

The powertrain trio was headed by Zink, who had previously worked on innovation projects that involved artificial intelligence and portable power generation. Although those efforts didn’t yield commercial applications, they did prove to be useful in developing the Virtual Visor. Zink also is a self-described computer graphics nerd (he wrote a book on the topic and built his own open-source rendering framework), a skill that he notes came in handy when developing the AI algorithms.

Working on their own time, the team built the first prototype—made from an old LCD computer monitor—within a month of Todd’s brainstorm. This was used to pitch the idea to an internal Bosch review board and secure initial funding, which was followed by several more development rounds—including trial-and-error and observing how people use traditional visors—and approval stages. Members from Bosch’s Multimedia division eventually joined the process to help finetune the technology.

The system uses an RGB camera—mounted in the rearview mirror or steering wheel—to monitor a driver’s face. AI is used to identify facial landmarks (eyes, nose and mouth), where a driver is looking and how the sun’s shadows are being cast. Based on these inputs, the system automatically darkens the section of the display through which light hits the driver’s eyes, while the rest is see-through. If there is a loss of power, the full visor is darkened.

Bosch says the LCD-based visor, which won a Best of Innovation award at the 2020 Consumer Electronics Show (CES) in Las Vegas, is much more effective than using a polarized plastic. The technology also could be used to help block headlight glare.

While there’s no available information on cost or a commercialization timeframe, Bosch says it is in “active discussions” with automakers and commercial truck OEMs about potential applications.