Bosch Has a Different Road to Autonomy

Frank Sgambati, director of marketing and product innovation for Chassis Systems Control in North America, Robert Bosch LLC, and his colleagues are confident that the technology that will provide the means to achieve automated driving is coming fast, with significant on-road capabilities by 2020.

They just don’t think it. They are helping create it.

And so it is somewhat interesting—if not slightly ironic—that one of the ways that there will be greater acceptance of automated driving among what a recent study out of the University of Michigan shows is a somewhat skeptical public (i.e., ~46 percent of drivers want to retain full control while driving) is not by deploying a full-suite of autonomous technologies—although they have those in abundance—but through parking.

That’s right: Sgambati and his team see the road to automated driving is via the garage. 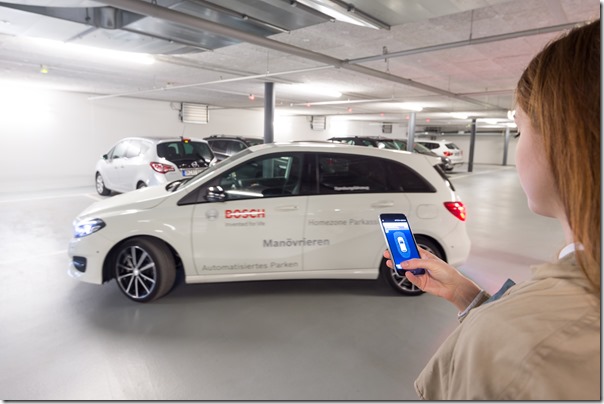 They’ve developed what they’re calling “Home Zone Park Assist,” a system that employs 12 ultrasonic sensors (located in the front and rear fascias) and a stereo camera mounted near the rearview mirror or, instead of the camera, four radar sensors, one in each corner of the exterior.  It is scheduled to be ready for OEM implementation by 2019.

The way it works is as follows:

The parking space must be within about 100 meters of the starting position. Up to 10 different parking spots can be programmed into the Home Zone Park Assist.

The system “learns” the environment via the sensors. Should there be something in the way—say a trash can is out of place—it will either stop or, if it can make a slight steering correction, go around it.

Should an animal or a child run out in front of or behind the vehicle while it is moving, the vehicle automatically stops, as well.

However, this is not a variant of “set it and forget it.”

That is, the driver must not only be present while the car is moving, but she must have her finger pressed to a virtual button on the smart phone screen. Lift the finger and the car stops.

Nitin Thomas, the marketing manager for Bosch Driver Assistance & Automated Driving, explains that this is done to assure safety.

Clearly, the technology could perform the task without human involvement.

But this also provides another benefit: By showing that a vehicle can drive itself without, say, going through the back of the garage, and by emphasizing how convenient it can be, the number of people who are positively disposed toward self-driving vehicles will undoubtedly increase.

Which would be a good thing for Bosch, because they have a whole lot of autonomous tech in their portfolio.