On August 20, 2020, the Insurance Institute for Highway Safety (IIHS) announced that Hyundai tied for the most combined TOP SAFETY PICK+ (TSP+) and TOP SAFETY PICK (TSP) rated vehicles in the U.S. Hyundai tied with Subaru. Both have 10 vehicles. One would imagine that fuller-line OEMs would have more. They don’t. And while Hyundai has been rolling out with some rather significant technologies both in terms of powertrain and telematics capabilities, according to Brian Latouf, Chief Safety Officer for Hyundai Motor North America (HMNA), safety is “foundational” at Hyundai. 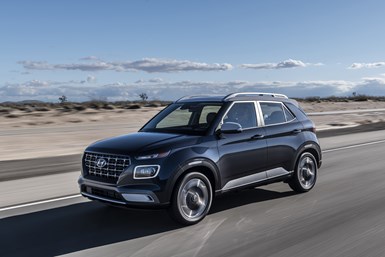 2020 Hyundai Venue SEL with the Premium Package and the Denim trim—which have LED headlights—achieve the IIHS TSP award. (Images: Hyundai)

If you want to know how important something is to a company, look at the reporting structure. In the case of safety at Hyundai, Latouf reports directly to Jose Munoz, who is both the president and CEO of HMNA but the global COO for Hyundai.

Latouf has a seat at the table, and that seat is one that is important to decisions that are made when it comes to vehicles and their content.

Another interesting point about the IIHS performance is that Hyundai has six crossovers and every one of them garners a top safety rating, from the Venue to the Palisade. What’s all the more intriguing is that some had criticized Hyundai from having had an insufficient portfolio of crossovers in the market and now not only does it have a full suite, but it has engineered and contented them in such a way that they are measurably safe vehicles.

Hyundai ties with Subaru for the number of IIHS awards it achieved with its vehicles. Of the 10, six vehicles are crossovers. And that means the company’s complete crossover lineup achieve the high ratings.

He adds, “To qualify for a TSP award requires an extensive commitment to safety as a company.”

Latouf joined Hyundai from GM, where he’d been for 27 years, including a stint as executive director for the company’s Global Safety Field Operation.

From an educational point of view, he is a mechanical engineer, holding MS and BS degrees from Wayne State University in Detroit and the University of Windsor in Ontario, respectively.

Latouf is certified as a Six Sigma black belt, an accomplishment that is well beyond the norm. Asked about it, he replies, “When you are an engineer it is pretty important. It gives you a good sense of understanding statistical trends on data, and how to design parts to show significance with design of experiments, trying to best understand what are major influences versus, perhaps, noise in the system. It is a very powerful tool that was helpful in my past when I did a lot of technical engineering work.” 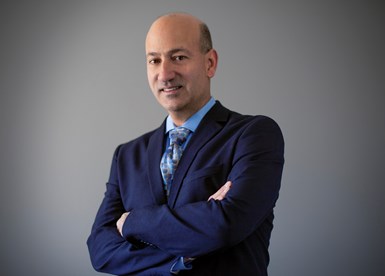 Brian Latouf: “Safety today is probably better than it ever has been.” But they’re working to improve it even more.

And presumably, it serves him well now as he helps coordinate the various activities that lead to the creation of safe vehicles. “In the engineering world, having good technical data drives decisions.” And that data undoubtedly helps when there are other elements that must be taken into account when a vehicle is being developed, all vying for attention and funding.

Latouf cites the late William Hadden, who had been the first director of the National Highway Safety Bureau, then the National Highway Traffic Safety Administration (NHTSA), then president of IIHS, as well as president of the Highway Loss Data Institute. A man who knew a lot about vehicular safety. Haddon, Latouf says, had developed a 3 x 3 matrix, that looked at time: before, during and after an accident; and elements: environment, drive and vehicle. “For each,” Latouf says, “you can think of different initiatives to improve the performance.” An example: vehicle design. On the one hand, he says, they’re designing vehicles so the structure maintains integrity and channels the energy to keep the occupants safe in the event of an accident. They are fitting an array of airbags within the vehicle to help attenuate injuries to the occupants. But he points out, “More people would like to avoid a crash than survive a crash.”

So this is a case of looking at the before of an accident, with hopes that it doesn’t get to the during and after phases. Latouf says that active systems that can warn the driver of impending problems—such as electronic stability control, automatic emergency braking and lane-keep assist—are absolutely important when it comes to accident avoidance. Hyundai offers the technology, he says, standard on 14 model year 2020 vehicles—which represent 96% of the company’s sales.

The matrix is a square. There is another geometric shape that is important to safety development: the circle. Latouf explains that it is necessary to look at current conditions and at the past. “Research is foundational to understanding how vehicles perform in the field,” so having field data that show how decisions made in the past lead to the conditions being experienced in the present can lead to ideas that can lead to innovations that can result in new technology introductions. “The circle never really comes to an end. You continue to improve. A learning culture is really important for a company.”

“Safety today is probably the best it has ever been in the U.S. fleet,” Latouf says. “But still some 36,000 people die on our roads every year.”

Latouf says that about 94% of those fatalities are a result of driver behavior and mistakes. So Hyundai is working with Tier One supplier Aptiv on the development of autonomous vehicle technology. “If you can take away the human factor, you can significantly go after the 36,000. That’s the promise of automated vehicles.”

The ultrasonic system that detects children and pets left in a vehicle. In 2019 19 children left in vehicles died of heatstroke.

But there are other things they’re doing to save lives today. For example, according to NHTSA 19 children died of heatstroke when they were left in parked vehicles. Hyundai has not only developed a rear occupant alert (ROA) system based on door logic (if you open a rear door at the start of a trip, you are messaged on the center cluster at the end of the trip to check the rear seat) but an ultrasonic ROA that can detect movement in a rear seat (children and pets) and alerts the driver—everything from honking the horn to sending a message via Blue Link to the driver’s smartphone—to the situation.

Safety isn’t just one thing. Not an airbag. Not a sensor. Not an actuator. It is an array of things—as well as of messages to make people aware of the importance of safe, responsible vehicle operation.

Brian Latouf has his hands full. But it is a good thing that he does, because it will lead to safer vehicles.

Consider: are people at companies who are not on the left side of the bar chart going to be satisfied with where they’re at? Probably not. So they’ll work to create safer vehicles. Which is good for all of us.