The role that tires can play in autonomous fleets, the electrification of the OEMs’ products, micromobility and more on this “Autoline After Hours”
#Ford #PSAPeugeotCitroen #GeneralMotors

At the present time, “fleets” are commercial enterprise-owned units, such as the delivery vehicles that are operating at higher volumes due to the immense increase in on-line shopping since the pandemic has made many reticent to spend a whole lot of time in brick-and-mortar establishments, as well as equipment owned by companies that are in the mining or agricultural industries. 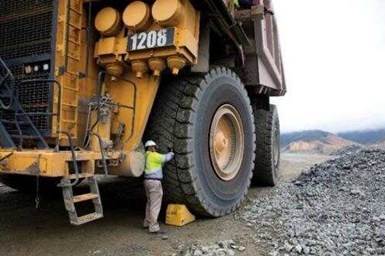 When you have a tire this size, you want data about it. (Image: Bridgestone Americas)

One of the things that is particularly important to fleet operators is that the vehicles stay on the road (or off, depending on the type of vehicle) for as much time as possible in order to have an excellent cost of ownership.

As there is a shift toward autonomous vehicles for people (as well as for goods), as companies like Uber and Lyft work toward operating ride-hailing without a person behind the wheel offering you a mint, it will become essential for them to keep those vehicles rolling as much as possible, too.

And when it comes to “rolling,” one can’t but think of tires.

Goldstine points out that tires are in an ideal position to offer data about conditions, be it about the road condition or the weather. Information collected could be sent to a cloud and then used to provide information to other vehicles in the fleet.

Presently the company has what is called the “iTrack” tire management platform that is used in the mining industry. The system allows customized geofencing, speed alerts and other information useful for fleet operators to know. Goldstine explains that when one of these massive vehicles is in operation, even too-sharp a turn can have negative consequences on the tires—and these tires are in no way small or inexpensive.

Going forward, this sort of capability could make its way into the fleets of light vehicle operators, Goldstine says.

Goldstine talks all about what Bridgestone is doing in the fleet/mobility space on this edition of “Autoline After Hours” with “Autoline’s” John McElroy; Pete Bigelow, senior reporter at Automotive News who specializes in mobility; and me.

Then, John, Pete and I discuss a variety of topics, including which OEMs seem to have the best strategy for electric vehicles.

The day of the show (November 11), Ford, for example, Ford officially unveiled the 2022 E-Transit, a fully electric cargo van designed commercial operations. When announcing the vehicle Ford president and CEO Jim Farley said, “Ford is North America and Europe’s commercial truck and van leader, so the transition of fleet vehicles to zero emissions, especially for the fast-growing last-mile delivery segment, is critical to achieve our carbon neutrality goal by 2050.”

With the E-Transit and the electric F-150, Ford is positioning itself as a leader in electric commercial vehicles. (Image: Ford)

What’s more, Ford will be launching an electric F-150.

Farley emphasized that scheduled maintenance costs for the E-Transit are estimated to be 40% less than the average for a gas-powered Transit—going to the aforementioned point about the importance of total cost of ownership for fleet vehicles.

The E-Transit will be equipped with a 4G LTE modem, that will allow connection to Ford Telematics and Ford Data Services, to improve fleet management.

But on the other hand, there’s GM, which is investing billions in building electric capability but seems to be focusing on consumer vehicles, like the HUMMER EV and the Cadillac LYRIQ.

Other topics we talk about include micromobility (e.g., e-scooters and e-bikes), which is undergoing a phenomenal growth, as cities around the world are reconfiguring some of their roadways to make them more bike- and pedestrian-friendly. We talk about the role that ride hailing will play (presently, the ride-hailing companies are not doing particularly well; I misstated Lyft’s Q3 numbers: it reported revenue of $500 million, not a loss of $500 million, but that $500 million is a 48% decrease from the number reported in Q3 2019; the actual Lyft Q3 2020 loss is $459.5 million).

And we also talk about the PSA-FCA Stellantis merger and what the combined company’s strategy may be.

All that and more, which you can watch it on Autoline After Hours.