While Range Rover has a relatively short history in the U.S., it is in fact celebrating its 32nd anniversary this summer.
#Ford #BMW #RangeRover 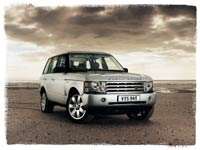 While Range Rover has a relatively short history in the U.S., it is in fact celebrating its 32nd anniversary this summer. Long though this is for a single model, what is more astonishing about this ground-breaking vehicle is that it went a full two dozen years before undergoing its first facelift.

It was in June 1970 that the original Range Rover first saw the light of public day. Coming from Land Rover, which had made its name in producing rugged off-road workhorses used by farmers, the military and police the world over, the new model aimed to continue the tradition. It had all the off-road capability for which Land Rovers were renowned, and even retained some of the utilitarian aspects–it was recommended, for example, that the interior could be hosed down as there were not any carpets to worry about–but it was aimed at a different type of buyer. In the event, though, it became apparent that the closest most Range Rovers ever went off-road was when mounting a kerb in a tight parking situation. As its off-road behavior had been at the expense of its on-road characteristics, air suspension was adopted–at a considerable price for the customer–to the top of the range versions in 1984. However, it was not until 1992 that the car began to change visibly, when the wheelbase was lengthened and the originally Oldsmobile-designed V8 was enlarged from 3.8 to 4.2 liters.

It was to take still another couple of years later, though, for the model to undergo the first major makeover in its life. The shape substantially changed although the design remained basically traditional. A separate ladder chassis with deep side members gave good protection for the underside of the body and all the under-works. Steering was by recirculating ball, which limited kick-back over hard going and the exceptionally long travel of the beam axle suspension endowed the car with very high cross-articulation abilities, valuable for preserving traction in extreme situations–and air suspension was adopted for the entire range.

By this time, though, the company had passed into BMW ownership, along with the rest of what was now called the Rover Group in 1993. Thus it was that when the latest Range Rover was conceived in 1996, its engineering and style design were under BMW direction. But to add to the convoluted story, BMW sold Land Rover to Ford in July 2000 when disentangling itself from its Rover Group investment—and in a strange twist of fate, the new model came back under the control of the one person who can be regarded as its godfather. As BMW board member responsible for product development, Wolfgang Reitzle had pushed hard for the new model before he lost his job. And now, as president of the Premier Automotive Group, to which Land Rover became a subsidiary, he was once again master of its fortunes.

By the time of the Ford takeover, the design had been completed, but development was still in progress. As Land Rover engineer Peter Thomson explains, “BMW was contracted by Ford to complete the development work. There were already a large number of Land Rover engineers working on the project, and the number of them increased after the sale–so we have had a parallel organisation within Land Rover/BMW since the takeover. It’s a great reflection on the part of the project management that the whole thing has come up so well.”

It has not been a cheap project for Ford. Before the new model could be built at the Solihull plant, Land Rover’s traditional manufacturing base in the West Midlands of England, a massive investment was needed to upgrade the historic plant. To date, almost $300 million has been invested in the 121-hectare (308-acre) site specifically on the Range Rover project.

Principal improvements directly linked to the new Range Rover project include the implementation of a $90 million new stamping plant–a first for Land Rover, which has previously relied on outside suppliers for all its body panels.

The plant, which was opened in December 2000 and is staffed by around 120 people, contains the largest press in terms of bed size in Europe. The five station, 8,300-tonne crossbar transfer press was manufactured by Müller Weingarten and is capable of handling aluminium and steel blanks between 1,370-mm and 4,500-mm wide.

It took just 14 months from the start of the building project–which saw 180,000 cubic metres of soil removed from the site–to the initial run of the press. At its peak, it will produce 58,000 steel or aluminum panels per week. Press changeover, including the switching of dies to change the pressings, takes less than 10 minutes. On older equipment, this procedure can take hours.

Alongside the new press is a $6 million try-out press, on which new tools and maintenance work can be carried out to ensure minimum downtime and disruption during routine maintenance. As well as producing panels for the Range Rover, the new press provides body panels to BMW for the new MINI; stamping time is currently split 50/50 between the two models. The press will also produce panels for future Land Rover models, though existing models will continue to source panels from existing suppliers.

Pressings from the new machinery have exceptional degrees of accuracy and are already making a valuable contribution to boosting quality levels in the new Range Rover. The huge aluminum bonnet is believed to be the largest single pressing of its kind in Europe.

Some $116 million was invested into a new body-in-white facility for the Range Rover. A brownfield site located within Solihull’s East Works, the heavily automated plant is equipped with 123 robots providing 6,350 welds for each Range Rover–automation within the plant is currently running at 73%, a step change for Land Rover where, historically, products have largely been built by hand. Employing 344 employees on a two-shift system, the plant can produce 10 new Range Rover bodies an hour.

Investment four years ago for the then-new Freelander included a new paint shop, at the time the largest of its type in Europe. Meeting all new and anticipated environmental legislation, the paint shop was constructed with one eye on the future, to accommodate Land Rover requirements well into the 21st century. As a result, the plant uses the latest water-borne paint technology to reduce volatile organic compound (VOC) material, while emissions from the paint curing ovens are treated by a five-canister regenerative oxidiser unit. This draws a significant proportion of its energy needs from the oxidation of the very fumes it is de-toxing.

The minimisation of energy consumption is evident throughout the shop. The building itself is fully insulated with double-wall cladding and has few openings so that heat can be conserved. A Combined Heat and Power (CHP) unit provides a cost-effective base electrical supply for the paintshop and provides emergency back-up insurance against external power cuts. Land Rover has previously won a National Energy Award for its Energy and Environmental programme at Solihull, which involves the use of CHP units at strategic points around the site. In addition, Land Rover has recently been awarded ISO 14001 status, the Solihull site complying with independently audited international environmental standards.

Some modifications had to be made to the paint facility to account for the extra size of the new Range Rover’s ‘envelope’–it is thought to be the largest unibody construction in the motoring world–and its greater weight. In addition, two unique colors in the Range Rover’s 12 colour palette were added as was an upgrade to the electrocoat oven to ensure the best possible finish. A revised cavity wax booth dedicated to the Range Rover was also added to the paint shop, allowing Land Rover to offer an extended corrosion warranty on the vehicle, up to six years for anti-perforation cover and three years cosmetic cover. In all, a further $21 million has been invested in the paint shop facilities.

The final piece of the Solihull jigsaw has been a $60 million investment at South Works, where the new Range Rover is assembled. South Works remains the oldest part of the plant and is adjacent to the management offices, but a comprehensive rebuilding exercise means it is now the match of anything in Europe.

Because the Range Rover is of unibody construction, the plant has had to be comprehensively upgraded to accommodate new overhead lines carrying the vehicles to the different stations. As well as a completely new floor, the roof of the building has been changed and has undergone major strengthening to enable it to hold the overhead lines. Among the special ergonomic features of the line are a number of tilt slings which allow the body to be rotated to facilitate access to the under floor area–it means an employee no longer has to work stretching up under the vehicle. Pre-assembled cockpits and wiring harness assemblies also ease the assembly procedure.

Just-in-time stock control for sequenced parts runs at between one to four hours and between four to 18 hours for non-sequenced parts. The majority of parts suppliers are UK-based with the bulk of the remaining parts–including the powertrain assemblies–coming from mainland Europe. More than 660 employees working in two shifts produce 10 vehicles an hour–annual production is expected to peak at 35,000 units.